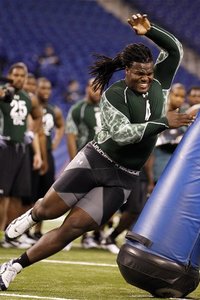 This is going to upset a lot of people. This pick was a lot harder to make then the first round pick, where Bowers who absolutely will not fall out of the top 5 come draft day fell into my lap and I didn't have to think twice about picking him up. Here is everything going through my mind at this point in the draft.

- Quarterback is the biggest need for the Titans right now, and my choices are Andy Dalton and Colin Kaepernick...I'm sorry but I just haven't fallen in love with either of them. If the Titan's front office select Dalton with this pick then I will support because their scouts definitely will know a lot more about then me about his potential ceiling, but to me, I just see an average starter who can make sure his team doesn't lose games, but will never carry them to a win. Sounds a lot like everyone's favorite aging backup Kerry Collins to me. Dalton's arm strength right now has been described as average and serviceable. Able to make all the throws. I don't want a quarterback who is just barely meeting the standards of an NFL starter. Dalton will not hurt a team, but I do not see him as a franchise quarterback.

- Defensive Tackle is the second biggest need at this point, and there are at least two players who I believe have first round talent available right now. That's Austin and Paea. Of the two I'm super impressed with Paea's strength, but Austin is freakish his his combination of strength and speed, and is one of the most athletic defensive tackles to come out of the draft in a while. I believe him when he says that had he not been suspended he'd be in the conversation for best DT in this draft. I normally disregard injury issues with potential prospects, but hearing that Paea has had consistent problems with his knees throughout his career is not something I want to deal with. With Marvin Austin, the Titans get a chance to nab one of the biggest steals of the draft, and have the best Defensive line in the NFL for years to come.

Now on the clock: TitanFan2K and the Dallas Cowboys