With the 17th pick of the 2011 Music City Miracles Mock Draft, the New England Patriots (represented by nolesbroncos3456) select: 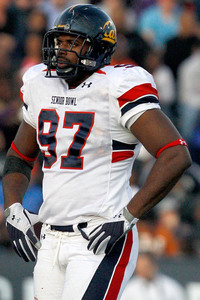 (Photo by Sean Gardner/Getty Images for Under Armour)

The Patriots need pass rushers in the worst way this year as the defensive linemen are aging and rapidly declining. We picked Jordan because of his ability to play both outside and inside on the line. He has the elite frame and speed in pursuit with the skills necessary to occupy blockers and blow past them. Once this guy gets his hands on you, you might as well give up as his tackling ability is off the charts. Cameron also has a great motor and the experience in both a 3-4 and 4-3 so when we run both, he'll make a seamless transition. CJ showed the ability to dominate all by himself at Cal last year when Tyson Alualu moved on to the pro ranks to the sparkle kitties. We were pleasantly surprised that CJ fell all the way down to 17, as he is the top rated BPA DL. His career stats: 161 tackles, 17 sacks, and numerous TFLs. CJ was having a field day during Senior Bowl practices all week. At one point, Bungles Head Coach Marvin Lewis had to take him aside and tell him not to hit the QB by saying "If you do that again, they're gonna give you a GPS and you're gonna have to drive out of here." Mel Kiper has him ranked #14 on his Big Board while Scouts Inc has him #18.

Now on the clock: Knoxvillage and the San Diego Chargers