With the 16th pick of the 2011 Music City Miracles Mock Draft, the Jacksonville Jaguars (represented by CrazyTitan) select: 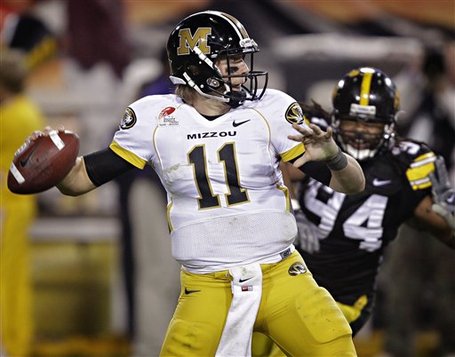 According to Football Outsiders, Jacksonville had the worst overall defense in the league last season and still competed for a playoff spot. GM Gene Smith feels ‘they are a defense away from being a playoff team’. Defensive end seems to be the popular choice in early mock drafts but there are needs all over the defense, particularly at safety. In the 2010 draft, the sparkle kitties used their first four picks on defensive lineman including a reach on Alualu. I think with the amount of young players on the roster, they are better off filling this need in free agency with a veteran and continuing to develop last years prospects.

With 10 of the first 15 pick being defense there will defiantly be some discussion in the war room about David Garrard’s successor. DG is serviceable for another couple of years and having some young talent pushing him doesn’t hurt. Jack Del Rio has been on the hot seat for years and may need/want to gamble on Cam Newton, although from what I’ve read, Gene Smith runs the draft and Newton is not a Smith guy. (I think a high wonderlic score could change some minds, but this is pre combine).

If Gabbert were to fall to sixteenth he is the BPA and fills a need. If QB is high on the Jags priorities I think they try and trade into the 11 spot, as soon as Washington pass on a QB, and get ahead of the Vikings. If it’s not that high they can trade down (likely with Seattle) to accumulate picks and grab LB Martez Wilson later in the round

Now on the clock: nolesbroncos3456 and the New England Patriots