With the 14th pick of the 2011 Music City Miracles Mock Draft, the St. Louis Rams (represented by z24lax) select: 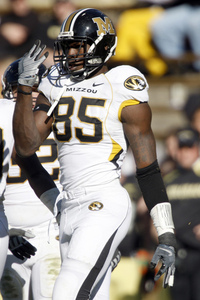 The toughest break of the draft for St. Louis happened well before this draft is going to happen, and that was Justin Blackmon returning to Oklahoma state because they would’ve loved to add an impact receiver here for their young QB Sam Bradford.  However they don’t need a WR as much as most think with Donnie Avery and Mark Clayton, both of whom clicked very well with Bradford before going down with season ending injuries, should return to full form this season.  There are also likely to be multiple options to upgrade the position in free agency as well if need be.  That being said, if the draft shakes out this way, especially with Gabbert on the board one spot ahead of Miami there is little doubt the Rams will probably be able to move this pick and add picks to fill other positions of need along the way.  After acquiring two franchise tackles, a franchise quarterback, and a great young middle linebacker in the last 2 drafts the Rams list of needs is slowly shrinking but there is still work to do.  The Rams main needs in my opinion are at the OG/C position, cornerback, impact outside linebacker, wide receiver, and interior d line and with both of the top corners and receivers off the board and no major first round interior line prospects, Smith appears to be the best player on the board to fill one of their needs, and is also a local guy who grew up and went to college in the state of Missouri.  I also wouldn’t be surprised if they reached for a cornerback here like Brandon Harris or Jimmy Smith to shore up a pass defense that ranked in the bottom third of the league last season.  The Rams could fill several other needs in FA as well, (if there is FA).  Logan Mankins appears done in New England and a potential reunion with his former OC Josh McDaniels could go a long way in shoring up the rest of the O-line as well as the multiple receiving options hitting the market.  If the Rams continue to draft well they could be another solid draft or two from being in serious contention.
Other players I considered with the pick were:

Now on the clock: RhiNo6705 and the Miami Dolphins