With the 13th pick of the 2011 Music City Miracles Mock Draft, the Detroit Lions (represented by danielreese05) select: 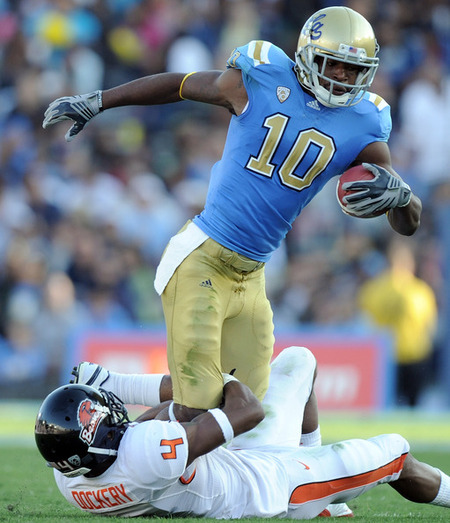 His skill set translates well to any type of defense that an NFL team would run but he's got experience in UCLA's 4-3 which is also what Detroit runs. He's got a good frame on him and it also allows for additional weight to be added on if necessary. Ayers has crazy fast initial quickness off of snaps which allows him to win a lot of battles against offensive linemen. He also has the ability to jam a tight end at the line and is an extremely physical player. Pass coverage is also solid.

Although he's got the physical tools to be able to be effective in the run game, his instincts are only average and he often loses focus on play-action. Getting off of blocks will be something else he'll have to work on, but luckily for Detroit, shedding blockers can be taught pretty easily. He reminds me a lot of Terrell Suggs in that he's kind of a one trick pony, but he does what he does so well that it hides a lot of what he isn't so good at in run support. This seem likea a bit of a reach here, but I think that if the Lions can get consistent pressure on an opposing QB, they can really take some pressure off an abysmal secondary which they need to address as well. With Suh and company dominating the line up front in 2010, another pass rusher to replace Kyle Vanden Bosch is an important issue that Detroit needs to be looking at. I doubt it takes long for Ayers to mesh with the Lions' system and I think he'll be an impact player in his first year.

Now on the clock: z24lax and the St. Louis Rams