With the 34th pick of the 2011 Music City Miracles Mock Draft, the Buffalo Bills (represented by DonFrancisco) select: 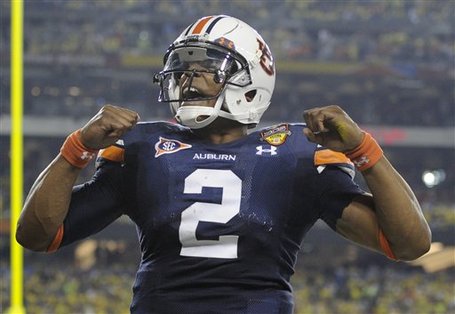 With the 2nd pick of the 2nd round of the MCM draft that has been completely overshadowed by seemingly endless Titan hirings and firings, the Buffalo Bills select Cam Newton QB Auburn.

I will start this by saying I don't want Cam Newton on the Titans, but I do think he has as much upside as any QB in the draft. That's what makes this pick good for the Bills, especially when you consider that they are thinking about taking Cam with the 3rd OVERALL pick. The Bills need a franchise QB. Ryan Fitzpatrick is a serviceable starter, but he is no one's franchise QB. Cam is a project, and by getting him in the 2nd round the Bills can afford to let him learn behind Fitzpatrick.

Cons:  lacks experience in a complex Pro-style offense. Lacks experience under center. Potentially character red flags(no need for me to rehash these right?)

I think the Bills would be well served getting him with the 2nd round pick. Ideally, he would have a couple of years ala McNair to acclimate to the NFL and a new style of offense. In addition the OC of the Bills need to adapt and incorporate some spread concepts into the Bills offense to take advantage of Newtons special skill set.

Now on the clock: carlostable and the Cincinnati Bengals