With the 1st pick of the 2nd round of the 2011 Music City Miracles Mock Draft, the New England Patriots (represented by nolesbroncos3456) select: 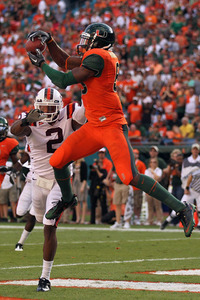 The Patriots selected Hankerson because he was the BPA WR and we need a WR that's bigger than 6'0 tall. After much discussion with the great Pats Pulpit folks over the weekend during the MtD 5 round mock draft, we settled on WR being the pick here. LH would complement the speed threats in the smaller WRs we have. He won't blow away anyone with his speed but he's a guy that has deceptive speed and quickness for his size. Hankerson is a WR that can block downfield, go over the middle, and is a gret route runner. He dominated the Senior Bowl along with Christian Ponder, repeatedly making big catches. LH has one of the bigger hands in this year's draft class, measuring in at 10 5/8 inches. His career at Miami was very exemplary despite having a less than solid QB situation in Jacorry Harris aka Jokery and a freshman Stephen Morris. The final stats: 134 receptions, 2,160 yards, and 22 TDs.

Now on the clock: DonFrancisco and the Buffalo Bills