With the 12th pick of the 2011 Music City Miracles Mock Draft, the Minnesota Vikings (represented by AGriff) select: 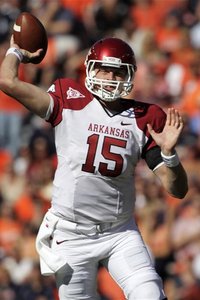 With the 12th pick of the 2011 NFL draft the Minnesota Vikings select, Ryan Mallett, QB, Arkansas.  The Vikings have a pressing need at the quarterback position and at number twelve I feel that Mallett is a good pick.  Mallett has an impressive physical presence at 6’6" 238 lbs and probably has the best arm in the entire draft, which combined with Sydney Rice’s ability to catch in traffic would most likely spell out some success for the Vikes.  Mallett had a strong knowledge of his play book at Arkansas and was allowed a lot of freedom to change plays at the line.  He can read the field well and is more mobile than he looks but, he is still isn’t going to run on anybody.
He has had mixed reviews on his footwork and his accuracy has been called into question, particularly if the receiver runs something like a streak. The bottom line to me, though, comes from his stats.  Over the past two seasons he has thrown for 8,388 yards with 69 TDs and only 19 ints. The reason this is so telling is because it is against top tier competition in the SEC.  Some say that Gabbert is the best QB but he has but up somewhat average numbers in a mediocre conference.  Mallett has flat out dominated through the air in the SEC.  This is a guy that I feel can either set for a few years or just jump in and start depending on what the Vikes need.

Now on the clock: MCM HOFer danielreese05 and the Detroit Lions