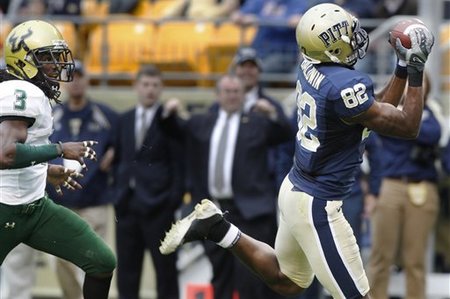 Baldwin is a very rare talent that surprised me when I saw he was available. With Donald Driver's career near it's end the Pack could look to WR to replace him. Baldwin is a beast when it comes to body position and catching the ball at it's highest point. He reminds me of fellow Pittsburg grad Larry Fitzgerald when I saw film of him. His route running is good but it could be so much better than what it is now. Donald Driver and Greg Gennings will be put into a mentor role to bring up this future star by teaching him the art of running 85 yards down the field with a broken leg and putting his team on his back. In terms of talent he's almost as talented as Kenny Britt and he seems like the kind of guy that will give you 110% night in and night out from day one (thanks to some interviews I read up on him from our good friends at Mocking the Draft). The Pack could look to go OL or DL here but no one left on my board deserves a first round grade so I went with Baldwin.

Now on the clock: nolesbroncos3456 and the New England Patriots

Stay tuned Monday for a recap of the 1st round and the kick-off of the 2nd!