With the 30th pick of the 2011 Music City Miracles Mock Draft, The New York Jets (represented by August West) select: 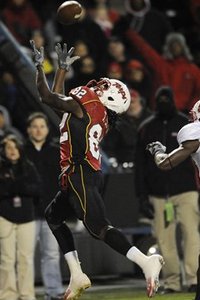 Braylon Edwards and Santonio Holmes are both free agents, and I can't see both being back. Smith is a fantastic young athlete who will probably be undervalued after he runs his 40. I wouldn't be surprised if he has a pedestrian sprint time, but most reports say his quickness, leaping ability and agility are elite. He's also a very strong blocker in the run game, and no matter what happens with Sanchez's growth as a QB, Rex Ryan is going to want to pound the rock. Smith has a lot of potential to be a Hines Ward-type of receiver who can work over the middle and make tough catches in traffic while Holmes or Edwards works downfield where they are better utilized. That's not to say Smith didn't rack up the big plays in college, where he showed a knack for winning jump balls despite being 6'0, 202. You don't rack-up 67 catches for 1055 yards and 12 TDs without being able to make things happen. He could also compete as a kick returner, which would be handy to have around if Cromartie signs elsewhere. If the Jets don't end up with major personnel issues at safety (at which point they'd probably look at Rahim Moore of UCLA if the draft shook out this way), then Torrey is definitely the best mix of value and need.

Now on the clock: p a and the Pittsburgh Steelers