With the 21st pick of the 2011 Music City Miracles Mock Draft, the Kansas City Chiefs (represented by Knox The Fox) select: 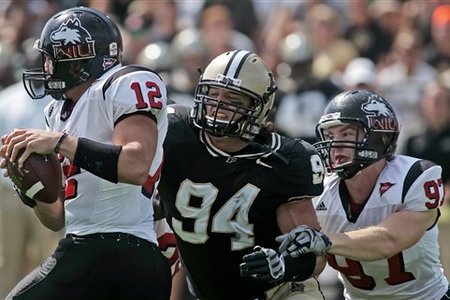 From Knox The Fox:

Tamba Hali is great.  Tamba Hali also doesn't have a contract as of now, and if he isn't a Chief next season then (pretty much) the entirety of their pass rush from 2010 will leave with him.  I think the Chiefs will manage to retain Hali, but without any other more pressing deficiencies it still wouldn't be a bad idea to bolster their pass rush.  Kerrigan can do just that.  He led the NCAA last year in tackles for loss per game, was third in sacks per game.  He is a smart, high-character workhorse of a rusher who seems like the kind of defender that Scott Pioli will go for, and he's arguably the best one left on the board.  The combination of Kerrigan and Hali would make a rising Chiefs' defense all the more potent in the years to come.

The Chiefs also have needs at WR and OL; I think it would be a reach to take one of the WRs left at this point and with most of the best O-lineman still on the board, the I would have to believe that one of them will still be available in round 2.

Now on the clock: bull4real and the Indianapolis Colts