With the 20th pick of the 2011 Music City Miracles Mock Draft, the Tampa Bay Buccaneers (represented by WinnipegTitanFan13) select: 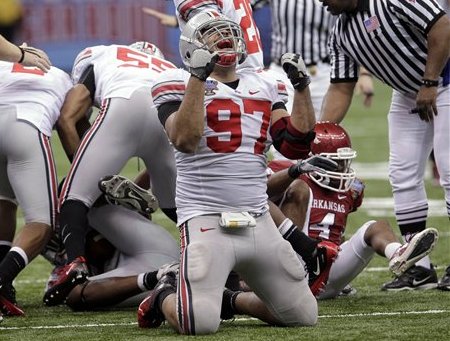 This draft has seen several of the top DEs go off the board already and I will follow suit for the Bucs.  Cameron Heyward is the choice here.  The Bucs have Drew Brees and Matt Ryan in their division, so having a formidable pass rush is a must.  They started revamping the line last year with their top two choices going to the DT spot.  Its time now for them to address their defensive end position.  Mocking the Draft coincidentally has Heyward rated as the 20th best prospect in the draft, so this seems to match up both need and value.  Heyward had a strong Sugar Bowl performance which helped his stock.  He is the most versatile end in the 2011 class, which will allow him to play DE or in the event of an injury, DT in the Bucs' 4-3 scheme.  He's also a tremendous pass rusher.  He's certainly got plenty of speed to get around lineman but also enough strength to anchor the line against the run.  I have two concerns with this pick.  Reports have said that he needs to refine his technique to truly become a star defensive end in the NFL, but the bigger issue to me is that he can sometimes ignore/forget about his run-stopping duties in favour of rushing the quarterback.  Overall though, he's certainly got the physical talent and ability to contribute early on.

The Bucs could also use linebacking help, so I also considered Justin Houston.  My top choice over both Heyward and Houston was Akeem Ayers but but he's off the board already and probably will not last this long in the actual draft.

Now on the clock: Knox the Fox and the Kansas City Chiefs