With the tenth pick of the 2011 Music City Miracles Mock Draft, the Washington Redskins (represented by redskinsmarc) select: 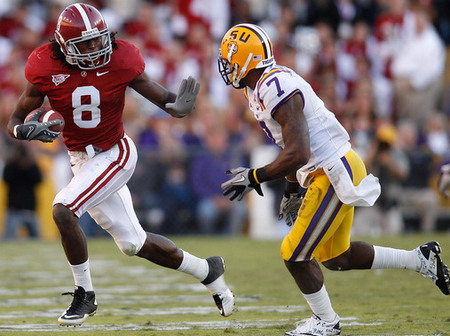 As tempting as it is to go QB with this one, I gotta go with Julio. There just isn't a quarterback in this class that I see being a long term starter. Mallet is a statue in the pocket who struggles with accuracy at times and makes poor decisions in the clutch, Newton is a project quarterback who has great athleticism and a strong arm, but hasn't proved that he can run a pro-style offense (Jamarcus Russell and Vince Young come to mind), and Jake Locker has plummeted down draft boards since this time last year with his inconsistency and inability to win games (his win percentage is well below 50).

As for Julio, the dude is a straight up beast. He is one of the few receivers that I have ever watched who could take over a game and "put da team on mah back, doo" on his own. He hurt his hand against South Carolina, had surgery on it, and then proceeded to play some of the best football of his career. He finished the year with 1133 yards and 7 touchdowns on the year and will give the Redskins the big receiving threat that they desperately need.

There are big holes along both lines that desperately need to be addressed, but I don't see anyone that merits the 10th pick that is still on the board at those positions. The truly great talent evaluators can find solid guards and centers in the later rounds anyway, and there will be talent along the defensive line available for their second round pick. I see the Redskins being a big player next year in trying to get Andrew Luck, so Julio will have to be satisfied with catching dragons from Sexy Rexy for the time being. Plus, now Redskins fans will have a 50/50 shot of doing a "oooooo" cheer when they call a pass play.

Now on the clock: crazylegs28 and the Houston Texans