With the ninth pick of the 2011 Music City Miracles Mock Draft, the Dallas Cowboys (represented by TitanFan2K) select: 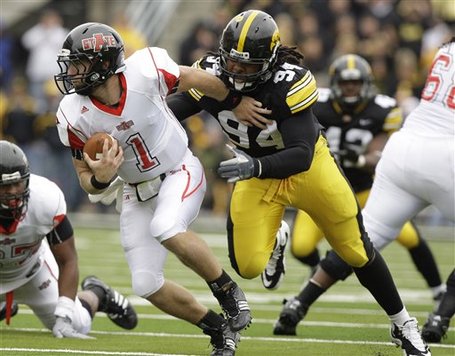 I assumed that living in Texas and being surrounded by Cowboys fans would give me some insight on this pick, but you know what they say about assuming. It was the Cowboys fans though that made the biggest asses out of themselves with some of the responses I got. Cam Newton was a name I heard more than a few times. I'd usually counter that by reminding them that Tony Romo is still on the roster only to be told that they are done with Romo and want a fresh start. Now I question wether Romo can ever be an elite QB in the league but he is certainly above-average, and even if Romo wasn't on the roster Cam Newton, or any QB in the 1st round for that matter, is the answer. Hell, at this point I think most of us Titans fans would give up our first born for a QB of Romo's stature. Mark Ingram was another name I heard but that's all types of insanity considering they already have 3 backs that get considerable playing time. I even heard AJ Green a couple times but I don't think I have to dignify that with a response. The few level-headed people I had a chance to talk with thought the o-line was in desperate need of an upgrade, which I agree with, but I don't feel like there are any o-line prospects worthy of the #9 spot.

So where do we go from here? It would have been nice to take one of the top 2 CB's in the draft to bolster the 28th rated pass D according to the Football Outsiders weighted DVOA, but they're gone. The top two DE's are also gone so if this were a real draft I'd look to trade down. Alas, I'm not the actual GM of the Dallas Cowboys and this is not a real draft, so I'll go ahead and select Iowa DE Adrian Clayborn. The Dallas LB core of Spencer, James, Brooking, and Ware do a lot to cover up the deficiencies of the Cowboys front 3 so adding Clayborn to the mix should help out the entire defense. Clayborn is good an excellent pass rusher but also great at defending the run. He has good size for an NFL DE at 6' 3" and 282lbs and also has great instincts. His stock has dropped some because he wasn't able to repeat his JR year performance of 70 tackles, 20 TFL, and 11.5 sacks but I attribute this to getting more attention from offensive cooridantors this season. Had Clayborn come out last year he easily would have been the first DE taken and most likely in the top 10, ahead of our beloved Captain Morgan. I won't let his senior season struggles put a damper on to what I feel is a great talent. In the end, the Cowboys were a tough team to draft for. Despite their record there seems to be a lot talent on this team. There were a few players I targeted at this spot but they were all gone so I decided to so I decided to go with the best player available at one of the few positional needs on this team and I came up with Clayborn. He should be a really good end for many years to come.

Now on the clock: redskinsmarc and his Washington Redskins