Share All sharing options for: Titans vs. Bills Statistical Preview 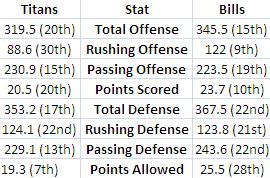 The offense should be able to put some points on the board in this one. The Bills have been good at forcing turnovers, but they sound a lot like the Titans' defense from last season that was giving up huge yardage numbers but getting bailed out with turnovers. That typically doesn't last forever.

This is a good match-up for Chris Johnson as well. The Buffalo defense has been bad against the run, and we have seen this year that CJ can run the ball against bad run defenses. Look for him to go over the 100-yard mark for the second straight week and the third time in four games.

It looks like the Bills would also have an edge running the football, but those numbers were mostly put up with Fred Jackson in the backfield. There rushing attack is not nearly as scary with C.J. Spiller.

The weather is usually a factor in Buffalo in December, but right now the forecast is a balmy 49 degrees at kickoff.