This session we'll focus on Matt Hasselbeck. By most accounts, this was Hasselbeck's worst game of the year. Yet, it wasn't all bad. Today, we will look at two separate throws by the veteran triggerman, one good and one bad...both resulting in points. 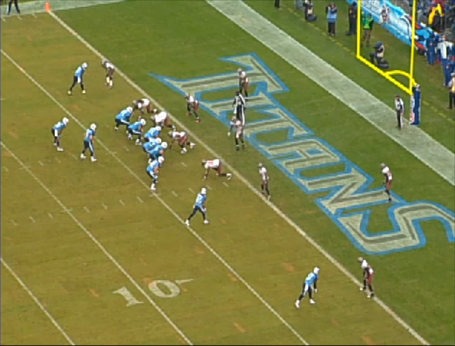 This was easily the biggest play of the game. Down 4 with 3:00 to go, the Titans (correctly) elected to go for it on 4th and 2.

Pre Snap: Stevens moves in motion from left to right. He's going to stay in to protect. Hawkins is split out left. Nate is in the slot. DWill is split out right. 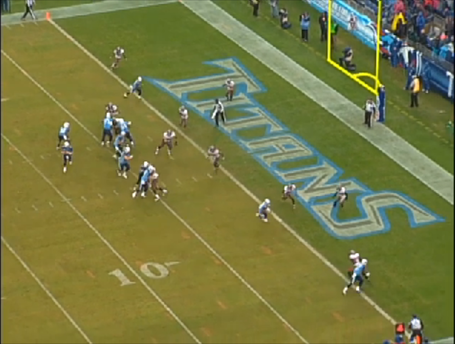 The ball is snapped and the Titans roll the pocket. Bucs are in zone coverage. You can see from this look that Nate is the primary read. In fact, this is nearly the identical play that Locker threw for a TD against Atlanta, only that was under center. As we can see, though, the primary is covered. Williams is getting upfield. He's going to run a deep in route along the back of the endzone. 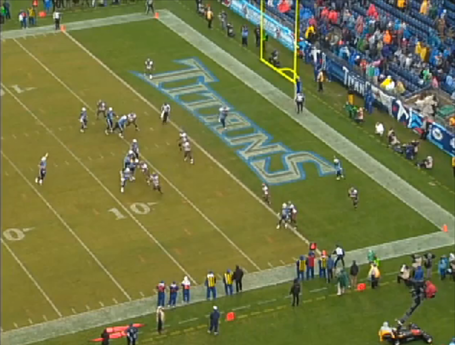 Now, Hasselbeck has looked off the primary and is on to his second progression. Hawkins is covered, though. 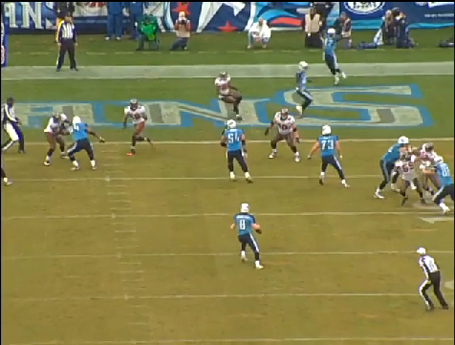 On to his third progression, D Will is flailing to show his quarterback that he's open, and Hasselbeck finally identifies him. 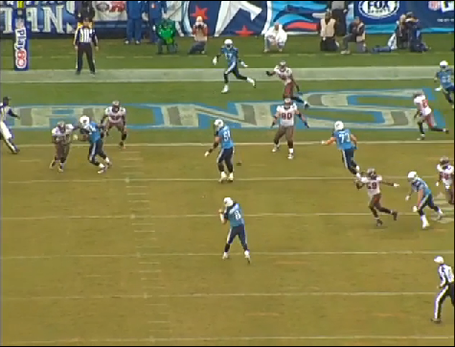 At this point, it's easy. Hasselbeck steps and delivers. 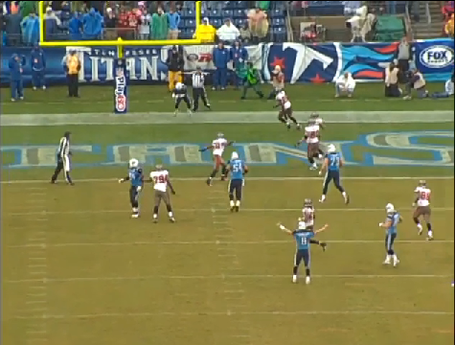 The throw itself isn't especially impressive, nor is the play as a whole, really. Still, in a pressure situation, Hasselbeck looked like a veteran, and was calm and smooth through the reads. Solid play. 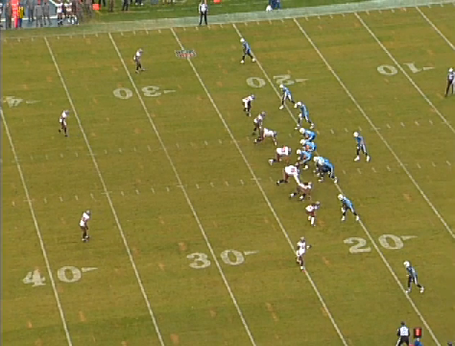 Following a facemask penalty in against Stevens in the 3rd Quarter, the Titans have a 1st and 25.

Pre-Snap: The Titans show an empty look by setting CJ in motion and splitting him out wide to the left. Receivers from right to left are Hawkins, Washington, Cook, Williams, and Johnson. For the purpose of this analysis, we'll just focus on Cook and Washington. You'll notice that the middle of the field looks wide open, and it's a likely indication that they are in man with no zone help in the middle of the field. 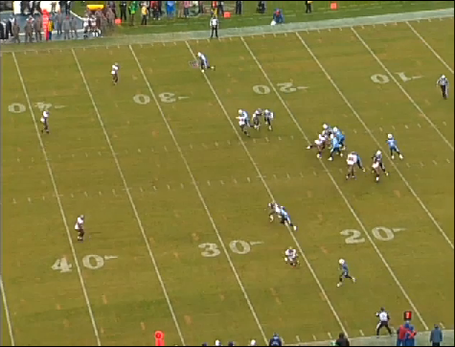 The ball is snapped and the assumption is correct. They are in man with two deep help over the top. Cook and Washington are running the infamous "pick" combination. Cook intentionally runs his deep route a little to the outside in an effort to get in the way of Washington's defender. He does so unsuccessfully. Hasselbeck's primary read is Washington and he never looks off him. 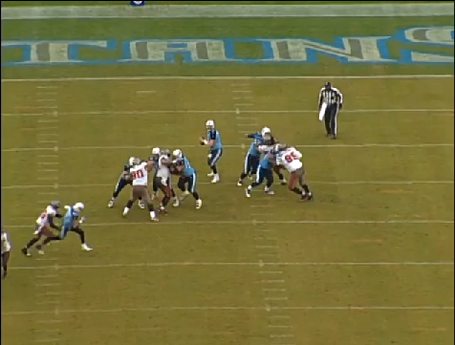 From this shot, you'd think Washington has Talib beat. Obviously, Hasselbeck felt the same way. Check out Washington's position and depth. If he keeps running an in route, he can potentially shield the ball from the defender. 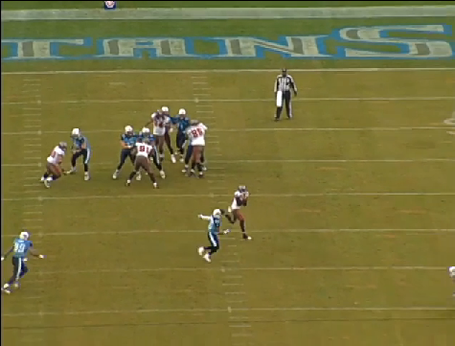 It would appear that's what Hasselbeck thought he was going to do, though this ball probably shouldn't have been thrown in the first place. You can see, however, that Washington begins to get depth on the route, which allows the defender to get a jump on the underthrown ball. Of course, this doesn't excuse the throw. With such tight coverage, Hasselbeck would have been better served to move through his progressions or just throw this one away.

Instead, the ball is intercepted and results in 6 points for the Bucs.

All in all, this game was a bad performance for Hasselbeck. But, when it mattered, Hasselbeck got it done. Certainly it looked ugly, and the weather wasn't any help. Still, at this point in the season, wins are all that matter, and he did just enough to get it done on Sunday.