Share All sharing options for: Bengals vs. Titans Statistical Preview 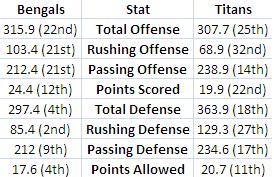 So those Bengals defensive numbers are really impressive, but let's put them in a little bit of context. In their 7 games they have faced only one top 10 offense in terms of yards per game, the Bills, and they are 10th. Their other opponents rank 23rd, 26th, 27th, 30th, 31st and 32nd.

Now the Titans are ranked 25th in total offense, so it isn't like they have some huge match-up advantage, but this isn't the 85 Bears defense. There will be some room to make some plays. The Titans just have to make sure they take advantage of the opportunities. That starts with the receivers making plays. Nate Washington and Damian Williams looked better last week. Hopefully that will give them some confidence going forward.

August and I talked last night on MCM Radio about forcing Andy Dalton to make some throws outside the hashes. Now I have no confidence that our defense will be able to take away the middle of the field, they haven't done it in over a year and a half, but maybe this is the week. Probably not.