Share All sharing options for: Titans vs. Falcons Statistical Preview 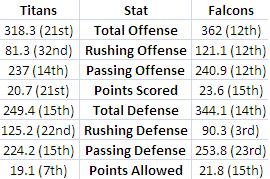 I had no idea how well the Falcons were playing against the run until this week. Of course that match-up does not bode well for a Titans rushing attack that ranks dead last in the league. It has looked better the last couple of weeks, but it is still a long way from where it needs to be.

The Titans defense is also better statistically than it seems like they should be. The number that is most important, points allowed, is only 19.1. That number is a little bit misleading because they have played a few bad offenses, but the NFL is a what have you done for me lately league, and the Titans did shut down a good offense last week. I chose to think about that and only that heading into this game.

It is going to take a complete team effort to win this game because this is probably the best team the Titans have faced all season.