As August pointed out in the Daily Links, I hope this past game was Damian Williams coming out party.  Upon first glance, the DWill's big play in the first quarter looked like a bit of an anomaly.  It appeared as if it were some kind of busted coverage, and Williams just managed to take advantage.  Upon closer inspection, though, there's more to it.  No doubt, there was some poor tackling, but it was good communication and scheming that put Williams in a position to take advantage of that situation in the first place.

Enough with the narrative, though.  You know the drill.... 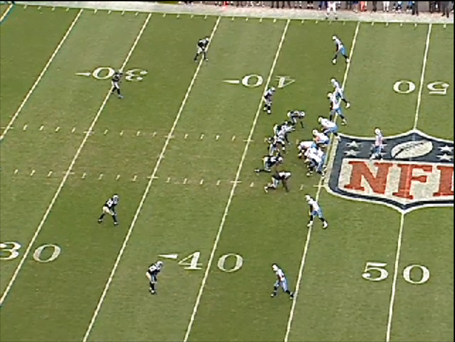 The Titans break the huddle in "11" personnel.  However, they line up in an empty, five wide set.  From left to right the receivers are Ringer, Williams, Cook, Mariani, and Washington.  The Panthers are in a Dime package.

The interesting thing about this formation is the placement of Ringer.  By moving him to the outside it forces one of the defense's (presumably) best pass defenders, their corner, against our worst pass receiver in our running back.  As we'll see in this play, they use Ringer to clear out this defender.

Pre-snap the Panthers are showing 6 rushers, potentially leaving only 4 defenders to defend 5 receivers. 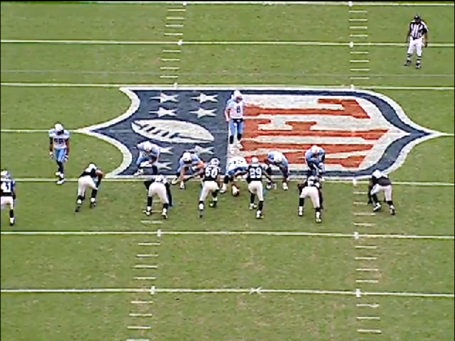 Hasselbeck identifies this and indicates to Williams that he's the Hot receiver.  That is, if the defense brings pressure from his side and/or he remains uncovered, Hasselbeck can get it out quickly to him on a shorter route. 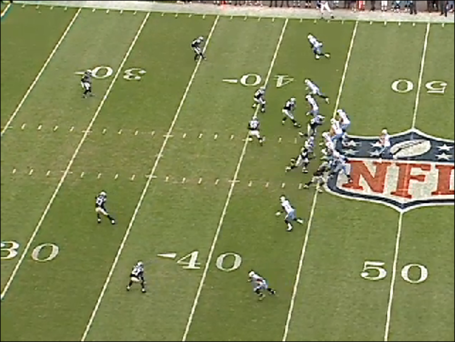 The ball is snapped, and the Panthers only end up bringing 4.  However, Williams remains uncovered.  It's possible the MLB has rolled his zone to the wrong side and this coverage is busted.  No less, the safety is the only defender manned up on Williams.  This is Hasselbeck's read the whole way. 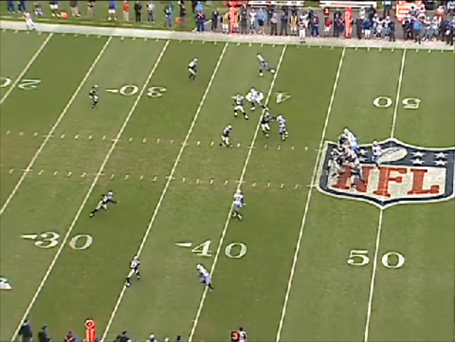 Hasselbeck quickly delivers the ball and the defender begins his break on Williams. 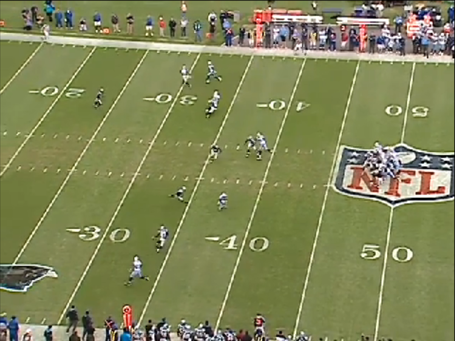 Williams catches the ball and quickly spins to the outside.  From this shot, you'd think that the defense manages to keep this to a small gain and possibly keeps it short of the sticks. 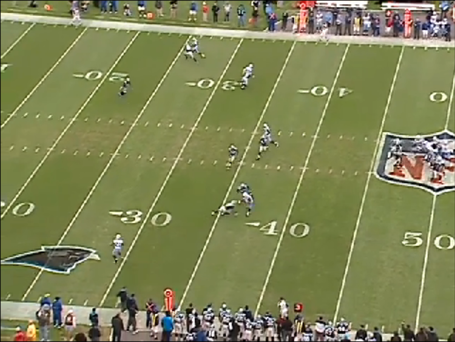 Williams has other plans, though.  He makes a great move on a poor angle by the corner that comes as secondary support. 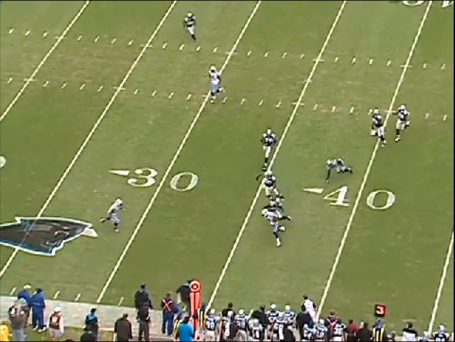 Williams quickly heads to the edge and turns this into a foot race. 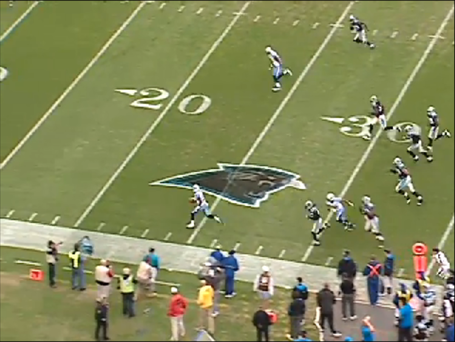 Such a great play to watch, especially in a year when we haven't seen an abundance of explosives, nor many fast starts to the offense.  Chris Palmer gushed about Williams as a playmaker this week, and this play shows us why.  It also explains why he's leading the Titans in pass targets over the past few weeks, as it's likely that he's performed well in practice.

This play is great for three reasons:

1.  Scheme - Williams in position to get the ball in space.

2.  Communication - The hot route communication between receiver and quarterback allowed them to take advantage of this space.

3.  Talent - Williams physical tools combined with these two allowed him take advantage of the opportunity and make a great play.

Seeing all these things on one play is something to build on.  The Titans have sorely missed Britt's absence.  The hope is that Williams can step up and be the #1 in his absence and create a solid 1/2 punch for years to come.  Plays like this would indicate that he's heading in the right direction.