Share All sharing options for: Titans vs. Panthers Statistical Preview 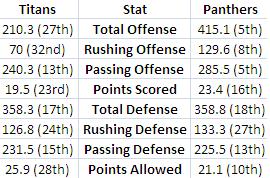 Looking at those numbers, it is hard to believe that the Titans are the 4-4 team and the Panthers are the 2-6 team. The defensive numbers are bad for both teams, but the Panthers have been really good on offense.

The Panthers offense is what really scares me here. It is hard to imagine that the Titans are going to have much of an answer for Cam Newton. He can throw the ball down the field, which is something that the Titans aren't good at stopping.

Newton has also developed a really good relationship with Greg Olsen, and anyone who has watched this team play over the last couple of years knows how much trouble they have had with tight ends. Football Outsiders has the Titans 30th against opposing tight ends this year and take a look at this stat that Evan Silva of Rotoworld tweeted today:

The good news is that the Panthers have been really bad against the run. If the Titans offensive line can block like they did in the first half last week, and Chris Johnson can give the same effort, this could be the game where he finally gets a few big runs and turns in 120+ yards.

They better pray that he does that because that really looks like the only shot the Titans have at keeping this one close.