If you were as angry as I was when this play happened on Sunday, you know what play we're about to break down just from the title.  Up by 10, the Titans held the Bengals to a 3rd and 5 at the Titans 15 yard line.  Holding them to a field goal would have been huge for momentum.  The coverage called was adequate enough to defend the play had it been run correctly.  Unfortunately, Barrett Ruud had other plans. 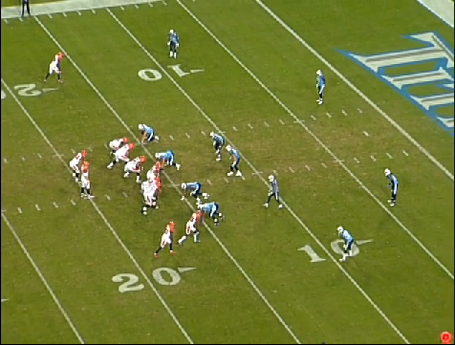 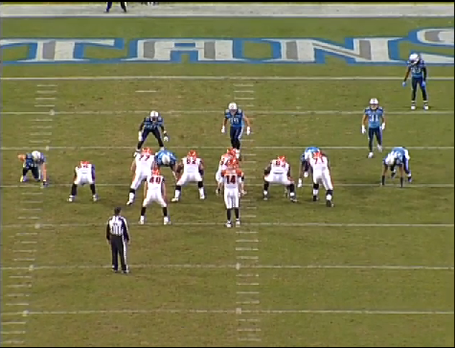 Titans line up in their Nickel package.  The Bengals are in "11" personnel.  TE is in the down position to the left.  Green is split out to the left.  Two WR's are stacked to the right.  We show a MOFO/Cover 2 look pre-snap.  Remember that when the middle of the field is open, it leaves the defense vulnerable to deep middle plays.  As we'll, see though, Gray has this accounted for in his playcall. 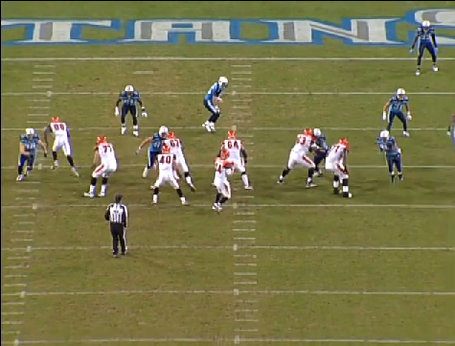 The ball is snapped and we now see that Titans are in a basic Cover 2 zone look.  Because of the pre-snap MOFO coverage, Dalton's read is Simpson the whole way.  Ruud's positioning as he gets into his drop would indicate that he's responsible for covering the weak side receivers in the middle of the field. 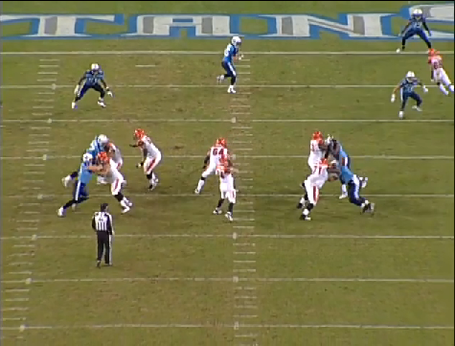 Ruud is deep in his drop.  This is one of the reasons why Gray allegedly wanted Ruud.  He can get deep into these Tampa 2 type drops.  And, while that's great and all, it's totally worthless if you can't cover when you get there.

Dalton sticks with his pre snap read and the receiver is now converting to a post route.  Just looking at this shot it would appear we have the play covered.  Gray has accounted for the middle of the field, and if run correctly, this play results in an incompletion at worst; potentially an INT at best. 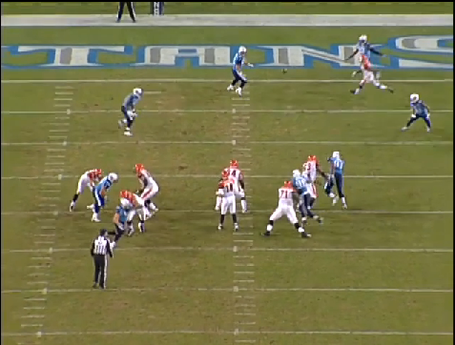 The ball is in the air and Ruud is still backpedaling.  Instead of actually covering a defender, Ruud is content on occupying an area.  He doesn't react, at all.  Actually, he's peeking inside at the QB, only to see that the ball is already out of his hands. 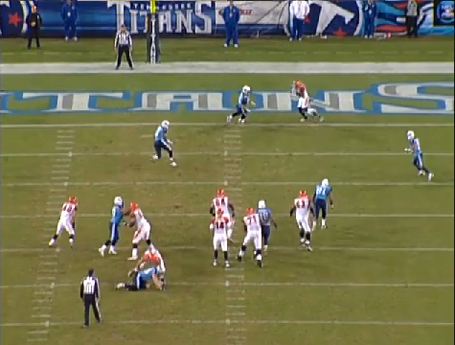 Ugh.  Awful.  Though, at a minimum, you'd expect that a MLB would lay into the receiver to at least try and rattle loose the mistake he committed, right? 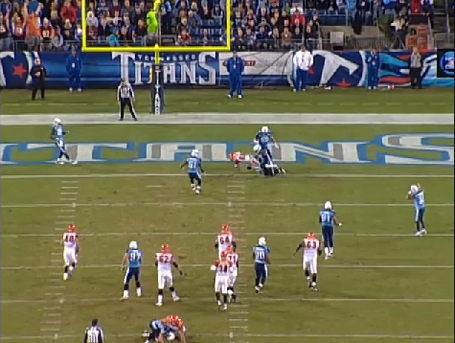 I was a Tulloch supporter this offseason, yet I could understand the frustrations with his struggles in coverage at times.  So, when I heard that we had acquired his alleged alter ego, a pass specialist with issues in run support, I could at least come to grips with the trade off.  I didn't necessarily agree with it (not that it matters given Tully's contract dispute), but I figured I could at least sleep a little better knowing that Ruud might improve this pass defense.

Fast forward to today, and I feel like I was totally misled.  Ruud might actually be worse than Tully in pass coverage, and he's certainly worse in run support.  Come to think of it, I can't name anything that Ruud has done well this season.  On plays like these, I often wonder (I'm totally serious, BTW), if we'd be better off with 10 defenders.  At least then we could account for the lost space on the field, instead of constantly counting on Ruud and getting gashed every time.  It looks like McCarthy may get a shot this week given Ruud's injury, and I think this team will be all the better for it.  I mean, it can't get any worse, can it?