Share All sharing options for: Film Breakdown: 2010 CJ vs. Indy

Even after a win over a division rival, it's still clear today that the run game is broken. Against arguably the worst run defense in the league, our star running back couldn't muster up more than 3 yards per carry. The question is why? And, that's a difficult one to answer. With so many moving parts on every given play, it's hard to peg it just on one person. I can tell you, it's not just one person, or even one unit. For the purpose of this breakdown, though, we'll just be examining Johnson's performance from 2010 against Indianapolis.

I went back and compared this year's Colts game to last year's. It's not an apples to apples comparison, of course. If anything, it should have been easier to run the ball this year, as Indy has struggled more against the run. I'll do my best to show what's happening with the assistance of some pictures. But, most of the time speed isn't accurately represented with the confines of a picture. That's the thing that really struck me, though. Chris Johnson was running at a different speed last year. Not only top end speed, but also his acceleration and cuts.

For today, I'll break down just two plays from last year. Although it is a small sample size, my hope is that it can help illustrate some of the differences between our run game this year and last.

So, onward through the jump for still shots of better times in our run game. 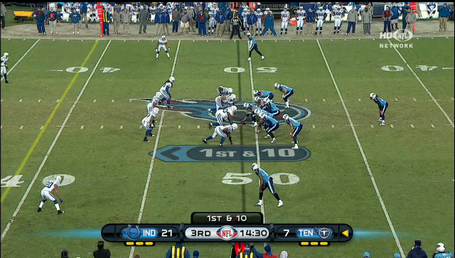 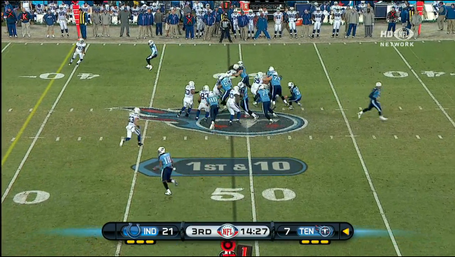 This appears to be an inside zone play gone back. That is, I don't believe this is a designed cutback. Initially, there's a small crease inside, but that closes quickly. You can see the safety now entering the play. 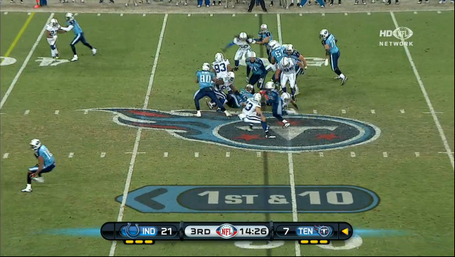 The safety is now one on one with CJ in the heart of the play as Johnson cuts back. 9 out of 10 we've seen Johnson get tackled in these situations this year. In this play, however, it's a different outcome. 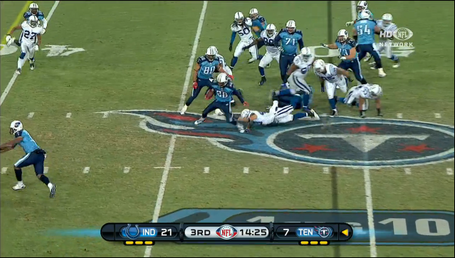 In the middle of a sea of defenders, CJ gives a quick shake and is off to the races. CJ begins running horizontally as the other safety (out of the screen, in front of Kenny) is bearing down on the play. 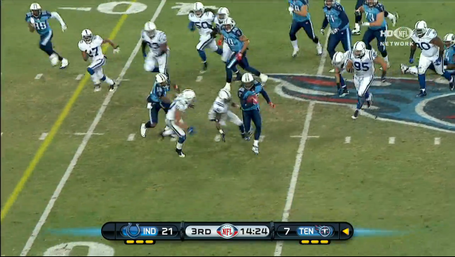 Johnson uses his uncanny speed to elude not one, but two more defenders and get to the sideline. 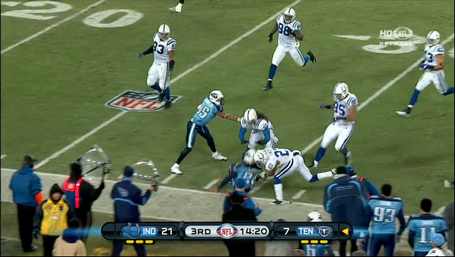 Once to the sideline, he quickly picks up another 15 or so yards. 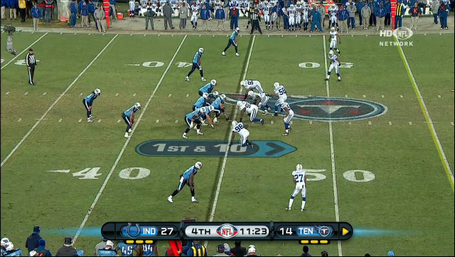 Titans are in "21" personnel with Cook in the slot. Colts have 6 guys in the box. 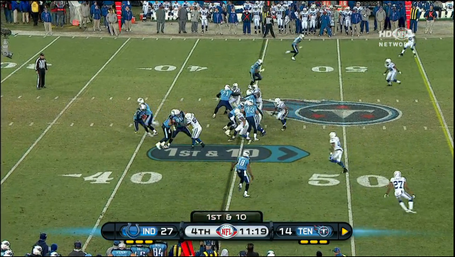 Safety drops down in run support. From just this shot, I would have wagered this wouldn't be a successful play. Yet, CJ wows us in a way that reminds us of better times by making defenders miss at speeds unrivaled by any other NFL running back. 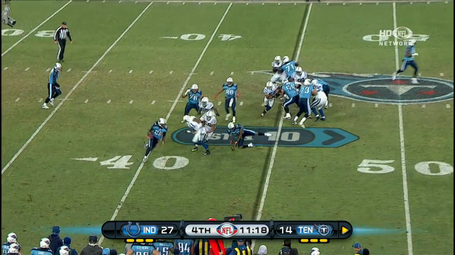 Again, this isn't anything other than Chris Johnson just being on a different level than the opposition. He makes two defenders miss here. 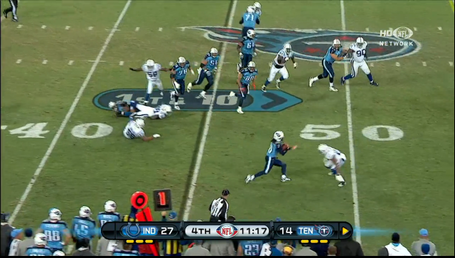 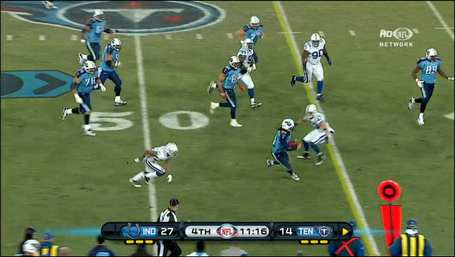 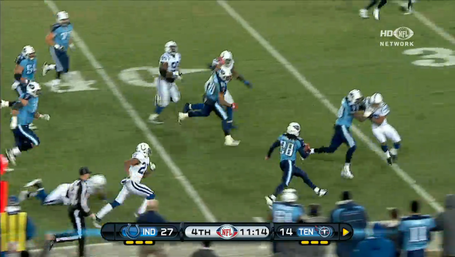 Defender fail #5. And, finally CJ is brought down after a 37 yard gain.

You look at both of these plays, and it's CJ's athleticism that really jumps out at the viewer. It's not the O-line, which is, admittedly better. But, that's not the "X-Factor" here. These big plays, and many other ~5 yard pickups throughout the game, aren't a result of decidedly superior run blocking. It's more Cj being decisive in the hole and running at a different speed than every other player on the field.

Johnson isn't the only one shouldering the blame this season. The O-line has played piss poor. But, the reason you make a guy one of the highest paid running backs in NFL history is that he can make plays in spite of these deficiencies. He did that last year, and he certainly did it 2009. I don't believe that all of Johnson's athleticism just vanished in one offseason. It just seems that he's timid this year. To use the old cliche, he's not "running hungry." I don't know how to fix this. It almost appears to be more mental than anything else, and he's clearly getting frustrated. My suggestion would be for Johnson to put on some game tapes from the glory days and contrast them to 2011. I'm certain he'd see the difference.