Titans-Browns Film Session #2: Cook vs. Linebacker - Who ya got?

Share All sharing options for: Titans-Browns Film Session #2: Cook vs. Linebacker - Who ya got?

We covered Jared Cook's matchup nightmare a few weeks ago. And, it's really something that's been discussed in detail over the past few years. Cook is too big to be covered by a corner, but too fast to be contained by a linebacker. He has the type of physical tangibles that would get any fan excited. Yet, all we'd really seen heading into this year were flashes in the pan. Big preseason plays, and seemingly mythical third hand reports of his amazing catches in camp. The past few years, though, we haven't seen that put into production. While he's not going to set any records this year either, it's exciting to finally see Cook making plays on the field.

The play we'll look at is easily the most explosive of his career. It's also a microcosm of all we've heard about Cook over the past few years. The mismatches. The speed. The size. It's all here in this play. What really makes this play great is it's simplicity. This is a typical, run of the mill passing play, but Cook's sheer athleticism turns it into the biggest play of the game. 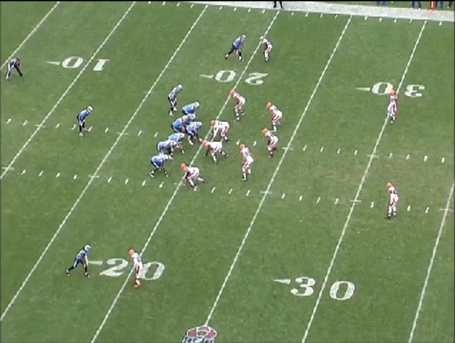 Titans are in "12" personnel. It's a balanced formation with one WR and TE on both sides of the formation. Cook is off RT in a three point stance. Browns show 7 guys in the box. Two safeties deep. 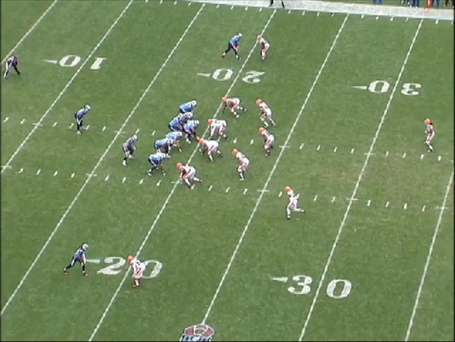 This play is a good example of how pre-snap motion can help identify coverage. Stevens motions from right to left. The strongside safety moves over the top of Stevens, hinting that he's in man. Also, the Sam linebacker is lined up right over the top of Cook. This doesn't explicitly mean that they are in man, but it's a good indicator. 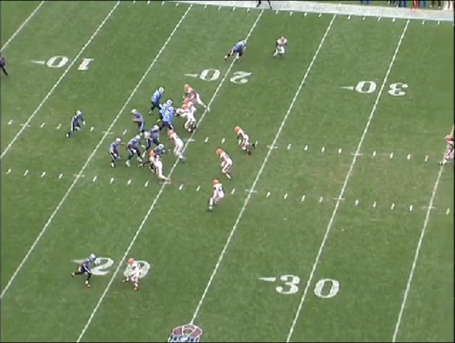 The ball is snapped and Hasselbeck begins his play action fake. 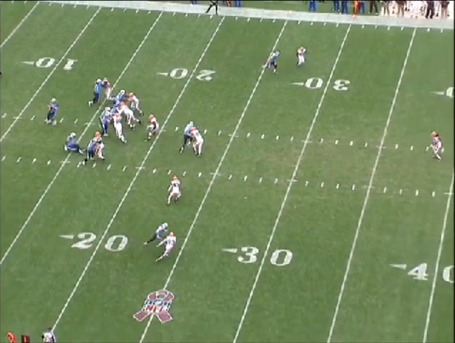 As Hasselbeck turns around, it's now clear that they are in man with single safety help over the top. Cook is running a slant over the middle. Both our outside receivers are running deep routes, which clears out the middle of the field. 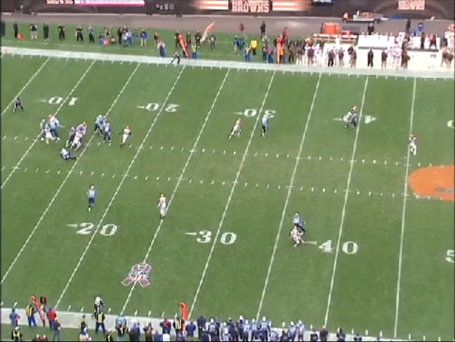 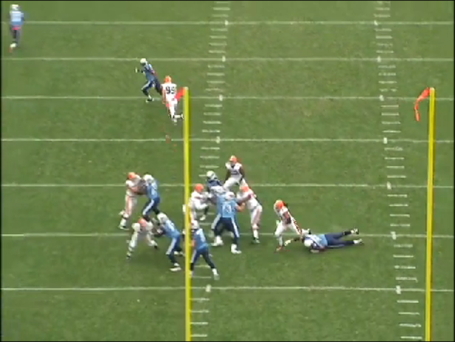 Both of these shots show off Cook's athleticism. It's a simple, no frills pattern, but Cook dominates his counterpart. In the matter of 7 yards (compared to the frame above), Cook has gotten 2 yards of vertical separation on a slant pattern. Hasselbeck has great protection and places the ball perfectly to Cook in stride. 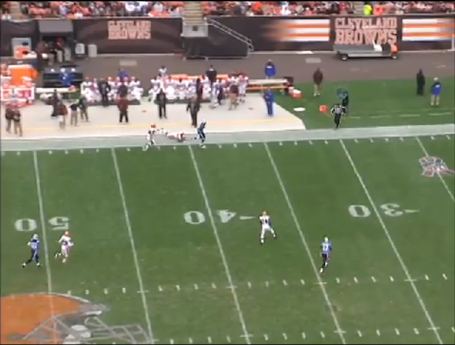 Cook does the rest. He takes it down the sideline and beats the safety help who completely underestimates his speed and takes a poor angle on the ball. The play goes for 80 yards and the Titans extend the lead to 14-6.