Heading into this game, the hot topic among fans has been the broken running game. Many of us, myself included, have been hoping for more schematic solutions to the anemic rushing attack, specifically more designed counter plays. At least in one instance, we saw this on Sunday. And, while the running game isn't completely back on track, we're at least heading in the right direction.

Down 3 in the 1st Quarter, and getting the ball for the second time, the Titans begin the drive with a designed run counter. 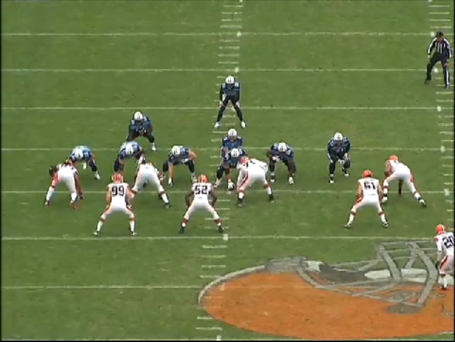 Titans line up in "21" personnel. They are in a Strong I formation (FB is offset to the strongside of the play). WR's are balanced on both sides. Browns show 7 men in the box. Titans have 7 potential blockers. 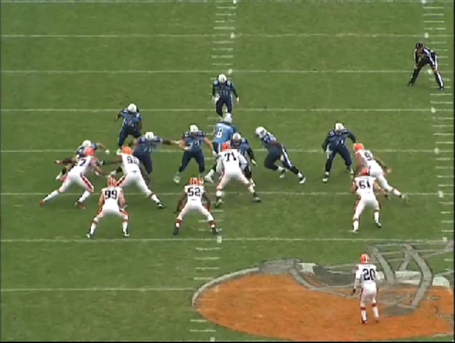 The ball is snapped and the movement begins. The offensive linemen are moving "playside" to the left side of the screen. Harris, the LG, has begun pulling. CJ's initial step is to his right, a designed fake. 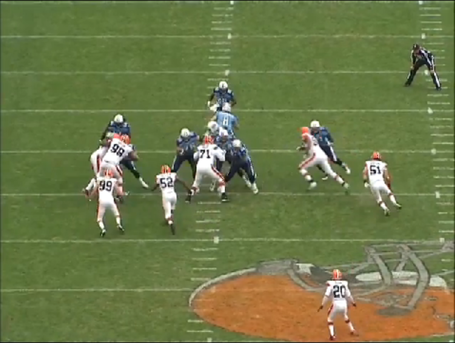 Hasselbeck now has his back to the defense, and is preparing for the exchange. CJ's weight has now shifted and, in real time, you can see that he's going to run to the back side of this play. On the playside, it's run like a normal outside run. Every one blocking appears to be blocking an intended off tackle run. This movement is the fundamental principle behind a counter play. Make the defense think you're going one way, and then sneak the RB out to the other side. It's intended to punish overly aggressive defenses, which we've seen a bunch of lately. 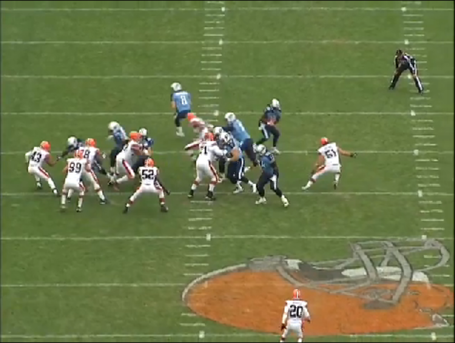 CJ now has the ball, and he's left manned up on the backside defender. Obviously, the preference would have been for the OLB to have crashed as well, but given the opportunity I'd gladly take CJ matched up on a linebacker in the open field. 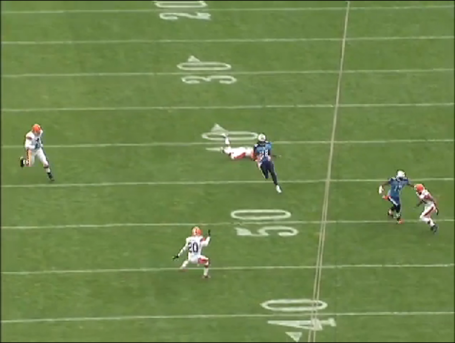 As expected, CJ punishes the linebacker with his agility and speed (he's face down on the field at the 40). And, the picture above perfectly illustrates the situations we want to get CJ in. Get him out of the crowd and into space where he can do his thing. Once in space, Johnson turns it upfield for an easy 25 yard gain.