Share All sharing options for: Colts vs. Titans: The Statistical Bizzaro World 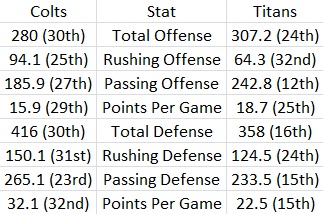 So when you look at that graphic, you can't see any possible way the Titans can lose this game, right? No so fast my friend. The Titans numbers would not look that much better than the Colts over the last couple of weeks.

As we have been saying all week, it is now or never for Chris Johnson. Indianapolis has been really bad against the run. However, if you look back at Johnson's numbers against the Colts throughout the years, they have not been that good. He has faced the Colts 5 times in his career (sat out the finale in 2008). In those games he has gone for 77, 34, 113, 111, and 39. That is an average of 74.8 yards per game, and that was back when he was good.

This would be a nice week to get Damian Williams, Lavelle Hawkins, Donnie Avery and Jared Cooks some confidence in the offense.  Those guys are going to have to be a whole lot better than they have been if this team is going to have any type of offensive success going forward.

This would also be a nice week for the defense to get back on track against a Colts offense that has struggled to do much of anything this season.