This play is when you knew the game could potentially get out of hand.  Down 10-0 in the with less than five minutes left in the 2nd quarter, Houston had the ball on their own 22 yard line on 1st and 10.  The play that followed was total busted coverage by our linebackers, and Arian Foster made us pay to the tune of 78 yards and 6 points. 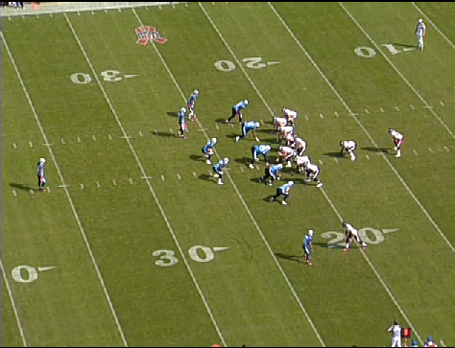 The Texans line up in a power set with "22" personnel.  They are in the I formation with two TE's stacked right and one WR split out left.  Titans are running their base 4-3 personnel.  Griffin is single high.  Babineaux is in the box, and almost looks like he's in the Sam linebacker spot (just to give you a point of reference).  Ayers on the outside rushing the edge.  McCourty is lined up on the outside TE.  Babineaux on the inside TE.  As we'll later see, the Titans are in Cover 1 Man. 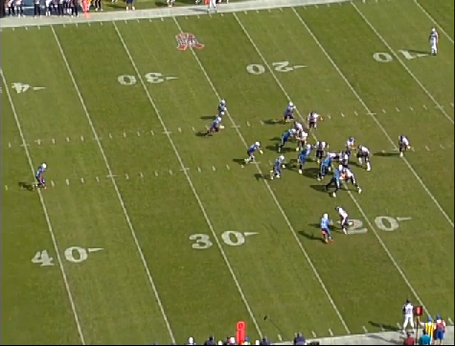 It's painful to say, and watch, but the Texans run this play beautifully.  Texans fake the inside zone to the left side of the formation.  At this point in the play, defensive positioning is fine. 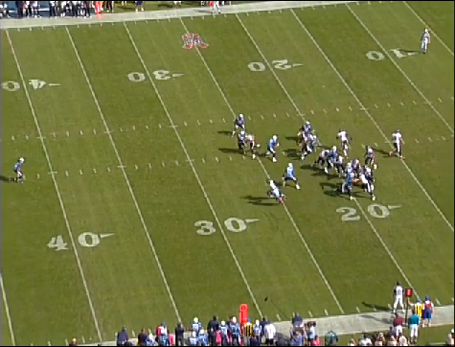 This, however, is when things get ugly.  Witherspoon is the Will linebacker in this play.  Linebackers have identified that this is is a play action and begin to flow to the backside of this play.  Here's the problem, though, at this point both Ruud and Spoon are "manning up" on the Full back.  You can see Ruud following the FB, and Spoon is just to his right and heading in the same direction.  Meanwhile, Foster is just now about to get to the hole. 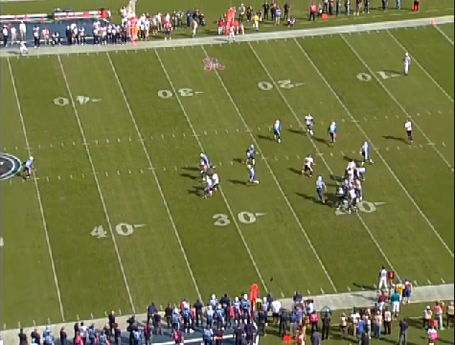 Foster is caught up in the hole in this shot.  Look at the middle of the field near the hashmarks at the 27.  McCourty is manned up against his TE underneath.  Babineaux is defending the TE running up the seam.  Finnegan is guarding the crossing receiver.  And then there's Spoon.  His back is to the play.  He's manned up on...no one.  Any guesses on who he should be covering? 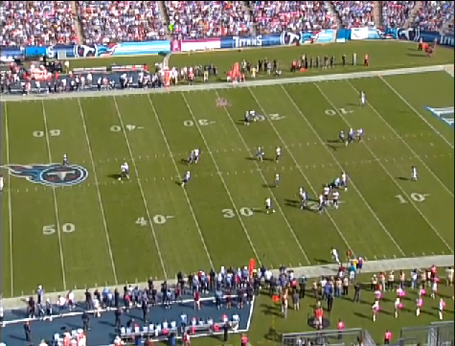 Spoon is now fumbling around in the middle of the field trying to figure out WTF is going on.  Seriously, when you watch the play live, it's evident that Spoon had an "oh $%^" moment a split second before this shot.  Foster now slips out of the backfield is wide open.  This frame shows Schaub right as he's delivering the ball. 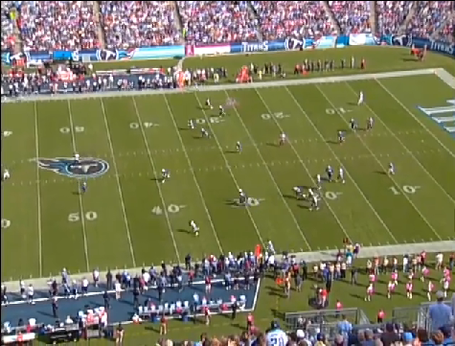 Foster has the ball.  Notice how far Spoon is from him (on the hashes at the 40).  Griffin is now pursuing the ball carrier. 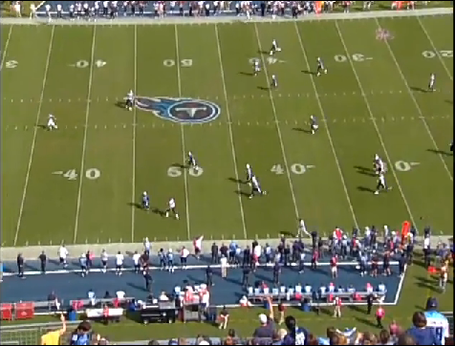 Griffin takes a bad angle, but he's put in a very difficult spot here.  You'd like to see make a tackle.  Still, 9/10 Foster is going to beat a safety when he's full speed in the open field. 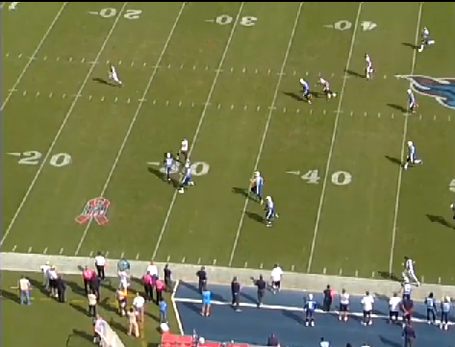 Foster cuts it back to the open field and takes it for six.

It's difficult to peg this play on anyone other than Spoon.  Part of me wants to think this could just be a miscommunication between Ruud and Witherspoon, but that's really unlikely.  In a man situation like this, each linebacker is going to be responsible for a man going a certain direction.  Obviously, Ruud takes the guy going his direction (which he did), and Spoon should man up on the back coming to his side of the field.  Pretty elementary stuff, and certainly frustrating to see something like this happening at such a high level.