Where the Tennessee Titans Stack Up Statistically

Share All sharing options for: Where the Tennessee Titans Stack Up Statistically 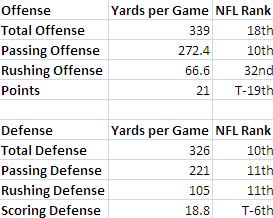 The first thing that jumps out at you there, obviously, is the fact that the Titans are currently 32nd in the league in rushing offense. I don't know this for sure, but I would be willing to bet that this is the first time since the team moved to Tennessee that they have been last in the league rushing after five games. It is a miracle they are 3-2.

Actually, it isn't a miracle. It is due in part to how well Matt Hasselbeck has played. They Titans are 10th in passing. You would have called me crazy if I would have predicted those two numbers before the season started.

One thing that we haven't spent enough time talking about is how good the defense has played overall. There lowest rank in any of these stats is 11th. That is really impressive for a unit that was horrific last season.

I said at the beginning of the season that I thought this defense would play better as the year goes along.  They took a step backwards last week, but if they can continue to improve they could end up being the type of unit that can actually win football games for this team.

This team is going to win a lot of games if the points allowed number stays around 18.