A Look At Tennessee Titans Runs by Direction

Share All sharing options for: A Look At Tennessee Titans Runs by Direction 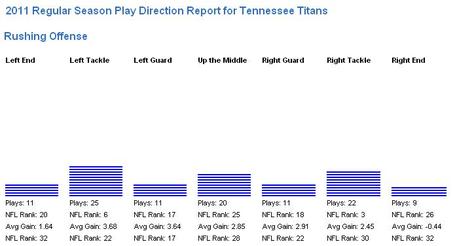 Remember last week on MCM Radio when August said that the Titans need to stop running those stretch plays? Well here is some visual evidence that they really aren't working.  The Titans are averaging just 1.64 yards per carry off left end, and -0.44 per carry off right end.

I do find it interesting that they are having a lot more success running the ball to the left side than the right side.  Well, maybe success isn't the right word because 3.68 yards per carry is the best they are doing at any spot, but 3.68 is better than 2.45.

This leads me to believe that maybe we are focusing too much negative attention on Leroy Harris.  I still don't think he is that good, but they have had more success running behind him than they have running behind Jake Scott.

Mike Munchak said this week that it wasn't time to make any changes on the line yet.  They are going to give the current group every chance to prove they can get it done, but don't be surprised to see Fernando Velasco in there pretty quickly if things don't change.

I don't know if he is the answer, but it is getting to the point that they have to try anything to get Chris Johnson going.