There's been a lot of talk about exactly what went down on that first Steelers touchdown to Heath Miller.  On 2nd and Goal from the 8, the Steelers lined up in a power set two TE's.  In a flash, we saw Miller in coverage against Karl Klug our defensive tackle, with no additional help over the middle.

This analysis will be a little different than others.  We'll look at the play from the All-22 shot, and the end zone view.  On this play in particular, I think this will help give better perspective on what's going on during the play.  Come with me through the jump and let's take a closer look at what happend on this play. 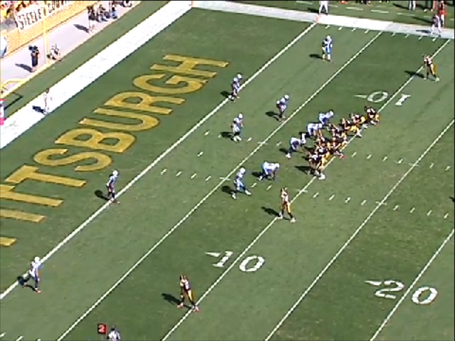 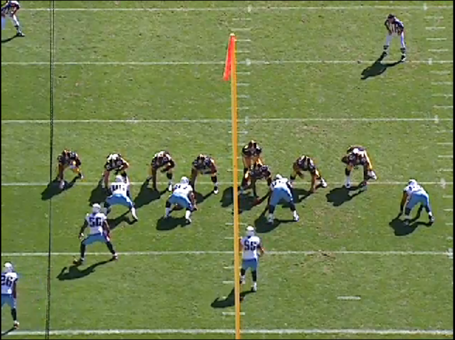 Titans line up in a base 4-3 defense.  Steelers are in "12" personnel.  Redman initially lines up as a single back, but motions out to the right side of the formation leaving them in an empty set with 2 WRs to the left, 2 TEs stacked right, and 1 RB split out right.  The Titans appear to be in some sort of cover 2 look, though that becomes less clear as the play develops. 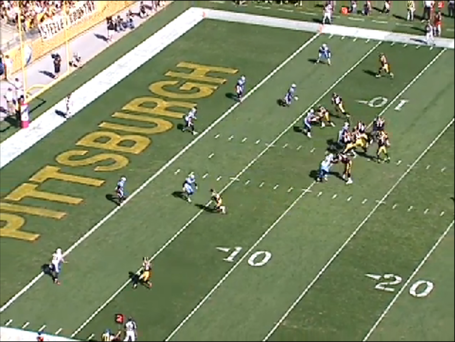 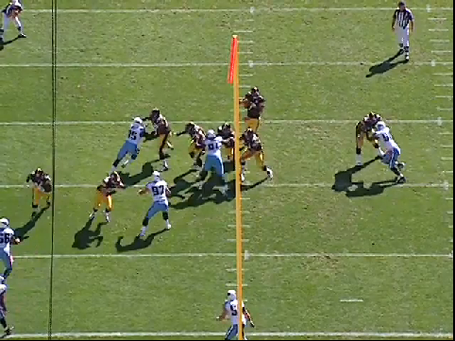 The ball is snapped and LDT Klug drops into to coverage.  This isn't a zone blitz, as there isn't pressure brought from else where.  It would appear that the play design was to drop Klug into coverage under neath, while only rushing 3 D-linemen.  Also, check out Klug's positioning.  He's leveraging the defender to the outside...protecting the short, middle of the field.

Ruud is in the center of the screen in the bottom picture.  He's backpeddling for reasons I cannot understand.  Looking at the top picture, you'll notice that everyone is manned up and there is two safety help over the top.  Yet, in a goal line situation, Ruud is dropping deep middle like it's a Tampa 2 call, effectively making this a Cover 3 look.  The middle of the field is wide open.

Before we continue, let me note that I don't know the play call.  Ruud's assignment may have been deep middle, and someone else could potentially have blown their assignment. 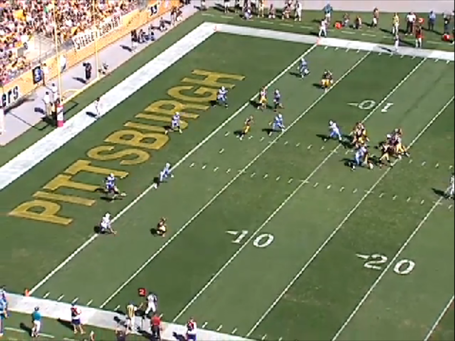 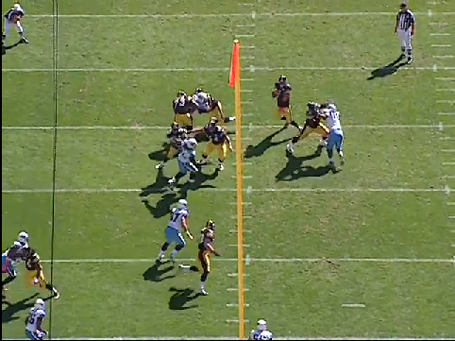 Here's where the play really starts to break down.  Ruud is almost in a safety position, hence the cover 3 comment from before.  It would appear to me that this isn't by design, though.  If they wanted a cover 3 look, the more likely scenario would be to drop the corners and Ruud, or the traditional route, one safety and two corners.  As the play sits now, there are three guys helping over the top, all bunched together.

Now, look at Klug.  He's shifted his hips and, I'm just speculating here, but it looks like he's releasing him to another defender, presumably Ruud.  If he's not, we've got bigger problems, as we would never want a DT in designed man coverage on any receiver.  Even if Ruud assumes he has deep middle, he's got to jump this route sooner.  Notice Ruuds position on this field in this picture. 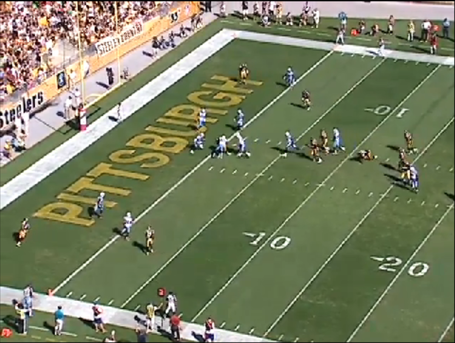 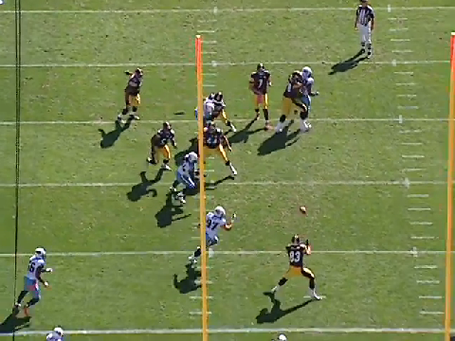 With Ruud's positioning fresh in your mind, look at him now.  He's still retreating to the center of the end zone.  Klug is now no where near a position to make a play, and, thus,  Miller is wide open.  Any competent high school quarterback could make this read and throw.  For Big Ben, this is a lay up.  Touchdown Steelers.

I'll re-iterate that I can't totally pass judgement here because I don't know the playcall.  Still, this doesn't look good for Ruud.  Even if his assignment is correct, you'd like to see him adapt and be a little more instinctual near the goal line.