With the sixth pick of the 2011 Music City Miracles Mock Draft, the Cleveland Browns (represented by CanuckTitan27) select: 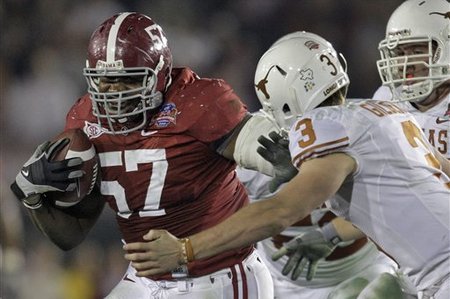 With A.J. Green being the best WR in the draft, the Browns move on to adressing another need: defensive line.

Dareus is a big boy who is well versed in all aspects of d-line play. He is versatile and can be utilized as a 3-4 DE or a 4-3 DT. His overall athleticism is without question, as could be seen during his famous pick 6 in Bama's national championship win of Texas.

I was originally conflicted between Dareus and Julio Jones, but I felt Dareus will be the safer pick. I'm not 100% sold on Colt McCoy in the pros quite yet, and I have the feeling that my thoughts are shared in the Cleveland front office. This means that WR is not quite the need that others are making it to be, and that means Marcell Dareus shoots up the draft board.

Now on the clock: ronburgundy7427 and the San Francisco 49ers