With the fifth pick of the 2011 Music City Miracles Mock Draft, the Arizona Cardinals (represented by Ice0ne(CAJ)) select: 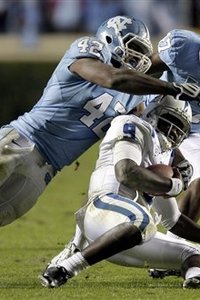 I have talked to some people at Revenge of the Birds on SB nation and they say they really like this pick as well as Patrick Peterson, Nick Fairley, AJ Green and others who haven't been taken yet.

Even though he didn't play last season due to his suspension, I suspect he will impress at the combine.
The Arizona Cardinals ranked 29th in overall defense and 18th in sacks.

Although the offense was ranked at least 29th or worse defense wins games!.

But like the ROTB fans said, they need alot of help in the Draft and FA mostly on defense so I'll look to later rounds to pick up some other positions.

Now on the clock: CanuckTitan27 and the Cleveland Browns