With the third pick of the 2011 Music City Miracles Mock Draft, the Buffalo Bills (represented by DonFrancisco) select: 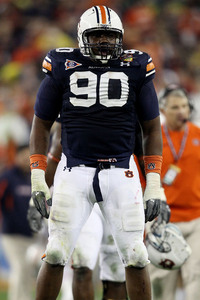 This just in: the Bills haven't been good for a while, and so several positions need to filled or upgraded. That makes my job a lot easier since I can go after the best player available AND fill a need position.To be honest, I was not prepared for the draft to go in this direction. I was hoping Peterson or Green would be there to drastically improve two areas that could use an upgrade. However, pretty much the whole Bills defense, including the DL, is an area of need. The Bills ranked last in the NFL against the run and 3rd against the pass (b/c no one had to pass to beat the Bills). When you break the stats down Football Outsiders style, the Bills consistently rank in the lower third of the NFL on defense in just about every category. Therefore an upgrade of the DL with Nick Fairley can only help.

As mentioned on this site several times Fairley has been unFairley compared to Suh and Haynesworth. At his current size, strength, and speed, he compares more favorably with a Sapp(a positive comparison) or a Dorsey(not so positive comparison at least for a 3rd overall pick). For the Bills, he would most likely play DE in the 3-4 and occasionally shift over to play NT as well. He is a bit undersized for a 3-4 NT, but has skills to fill the position in certain situations.  Fairley is a bit of a risk with issues like cheap shots and a history of taking plays off, but at times he has been dominant against high level competition. The Bills cannot afford to overlook his potential talent to upgrade their defense.

You will see several mock drafts that have the Bills taking a QB(specifically Gabbert). While the Bills need an upgrade at this position, Ryan Fitzpatrick is certainly serviceable and can hold down the position for another year or two. In addition, I am anything but sold on Gabbert as a NFL star.  Others I did consider for this pick include Bowers, Dareus, and Amakumara.

Now on the clock: carlostable and the Cincinnati Bengals