With the second pick of the 2011 Music City Miracles Mock Draft, the Denver Broncos (represented by trevor2013) select: 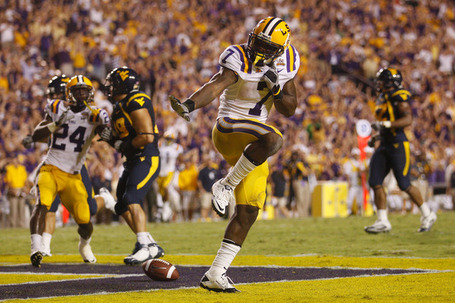 The Broncos pass defense was abysmal last year. They finished the season ranked 25th in pass D. Also, Champ Bailey is a free agent. There is a good chance that he will be gone. Another cornerback on Denver, Perrish Cox, could be facing time in prison for sexual assault. The Broncos need to sure up their pass rush as well, but Patrick Peterson is way too much of a talent to pass up, and there will still be good linemen in the other rounds. There are whispers that Peterson is going to put up ridiculous CJ-type numbers in his workouts, which will be all the more reason for Denver to select him. Patrick Peterson is the next great corner in this league and he will be way too great to pass up, especially since the Broncos have such a bad pass defense.  Also, he has showed that he stacks up very well against NFL talent, by owning future star receiver AJ Green and a decent receiver, Julio Jones, when he was matched up against them.

Fairley is still on the board, but he has possible character issues and questionable decision making. Also, like I said above, there are other good linemen that will be available later, and DB's may be a bigger priority. Also, Patrick Peterson is more of a sure thing than Nick Fairley. If Denver took either it player would be a good pick, but like I said, Peterson is way too talented to pass up on, especially with such a bad pass defense.

Now on the clock: DonFrancisco and the Buffalo Bills