With the first pick of the 2011 Music City Miracles Mock Draft, the Carolina Panthers (represented by hal41605) select: 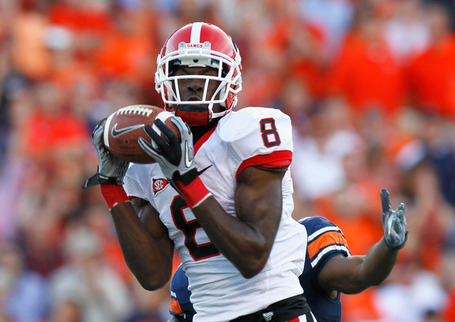 I obviously went against the grain with this pick, but after looking closely, I truly felt that it was the best pick the Panthers could make. AJ is the surest thing in this draft.  Tall, fast, lanky, great hands-- only injury can stop him from being a top flight NFL receiver.  The Panthers have needs at virtually every position, so I decided to pick the best, but also "safest" player available.  I also looked at Carolina’s stats from Football Outsiders from last year.  Surprisingly their defense was right in the middle of the league(16th), with the offense being dead last (31st passing, 32nd rushing).  I think the addition of Ron Rivera alone will improve their defense a few slots into the 10-15 range level, and thus spending the #1 pick overall on offense gives them the best value.

Most people have DT Nick Fairley as the #1 overall, but I am beginning to think he is overrated, at least slightly, as an NFL prospect.  He is actually on the small side for an NFL DT (for comparison Albert Haynesworth has 40 pounds on him), so I’m not sure he will be that dominating, double team-demanding presence, at least right out of the gate, which is what you need from a DT to justify picking them #1 overall.  He is also certainly no Ndamukong Suh, another comparison I think he may be undeservedly receiving hype from.  Carolina needs a QB above all else, but no one justifies the #1 pick in this class, so I think the next best thing they could do is add a playmaker to the worst offense in the league.  In this draft, that playmaker is AJ Green.

Now on the clock: trevor2013 and the Denver Broncos