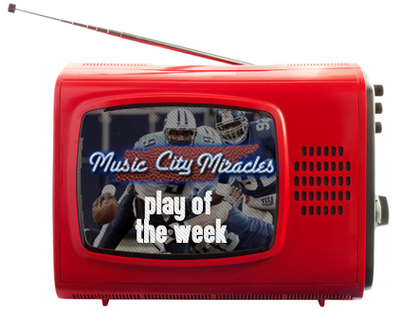 It was good to see the Titans bounce back after that horrible loss last week. I can't say enough about this defense. They might have given up a good amount of yardage this week but they were able to step up and force the Giants into turnovers. If you have a brain, you know that the POTW was Michael Griffin downing Brett Kern's punt at the 1 yard line. Unfortunately, that amazing play isn't anywhere to be found on the internets (If you have access to the entire game and know how to get it on the internet, then please let me know and I'll add it in).Hopefully the Titans can get a little win streak going and clobber the Broncos next week. Go Titans!

Videos after the jump...

There's our ball-hawking DT!!! Our DL got some pressure on Eli and forced him to throw on the run, where he's not terribly accurate. Hakeem Nicks should have caught the ball even though it was thrown behind him, but Cortland Finnegan was there to tip the ball up the Marks.

Again, good pressure by the DL, forcing Eli to do his best impression of Michael Vick and failing horribly. This still probably would have been a TD if it wasn't for Will Witherspoon (what a pick-up he's become) tipping the ball up in the air for McCourty to pick off. Hopefully he won't be out too long, because we have nobody behind ATV.

We don't need no stinkin' goalline RB! Actually I would so much rather have somebody else in there taking those hard hitting carries away from him. Anyways, as usual, Ahmard Hall does an awesome job getting that last LB.

This play wouldn't be here if it wasn't for the awesome special teams play by Michael Griffin. The defense got really close to getting a safety on the first play, but finished it off right here. Giants fans have nothing to complain about on this call, as there could have been 56353 other penalties called in the endzone. ATV needs to learn to get his head around on those throws, because he had good position on that play.

Let the man throw! This was probably the best play that could happen for our reeling offense. Our troubled QB was perfect on the drive, capping it off with a perfect pass that was put in a spot that only our young/troubled WR could grab it. Britt also had another great catch on that drive on another perfect ball thrown by VY. These two need to be successful for our team to be successful.

I think the 2008 Michael Griffin is officially back! Good to see that the only thing that is on his mind during these games is football. Sure, the only reason that this turnover happened was because the rest of our defense missed tackles, but they meant to do that right? And look who fell on that ball: MCM favorite Alterraun Verner! This kid just finds himself in the right place all the time, and that's not an accident. This play pretty much sealed the win for the Titans.

C'mon Chris! Only 42 yards?! Well, it had to happen at some point. the key to this play is that everybody got on a man and allowed CJ to cut to edge, where he's the best player in the league.

Terrell Thomas probably lost all bowel control when he saw our 310 lb Filipino lineman, Eugene Amano, come around the edge with Chris Johnson trailing. Good way to cap off this game.

Which play do you think is the MCM Play of the Week for Week 3 of the 2010 season?