Share All sharing options for: Fix For LP Field Sinkhole Has Unfortunate Price Tag... And Association 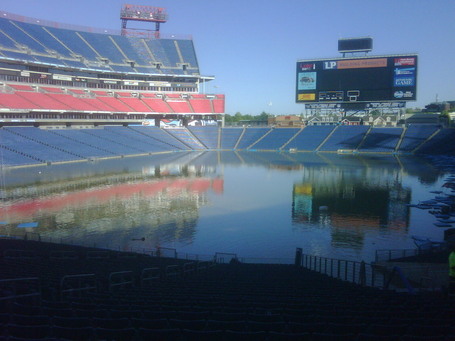 The Nashville Business Journal is reporting that the Titans organization sent a notice to Metro officials regarding the sinkhole that developed in the wake of the May floods. It contained a few unfortunate tidbits, including a price tag they estimate to be 'in excess of $250,000.' The cost of the repair may fall on Metro tax payers if Metro Nashville's insurance company does what insurance companies do best: deny the claim.

The financial burden will fall on the taxpayers of Nashville because the Metropolitan Government of Nashville and Davidson County actually owns the grounds of LP Field; the Titans have a lease to use it for football purposes. The fact that the cost of this is probably going to come down on the taxpayers of a city that's already strapped for cash certainly doesn't make me happy, but there's not really much anyone can do about it. These kinds of things will happen when your city floods, and frankly I'm still just happy that it wasn't worse than it could have been in terms of lives and landmarks lost.

The other unfortunate part of the letter was the fact that you've heard of the method they are going to most likely use to fill the hole, and it's not a good reference:

What, you thought I'd put the money quote above the jump?

To repair the sinkhole, the NFL franchise is considering a method known as "compaction grouting." It involves drilling holes in the area of the sinkhole and pumping in a thick grout to bolster weak substrate and fill cavities. On a much smaller scale, it is similar to the "top kill" method BP attempted in May to fix its leaking oil well in the Gulf of Mexico.

Now, it's a good thing that this is a complete different situation than the disaster in the Gulf, but it's never a good thing to be associated with any part of that mess. I mean even Toyota thinks BP is toxic these days.

[A huge tip o' the hat to gramsey, who incidentally has seats right above this hole,  for pointing out this story.]