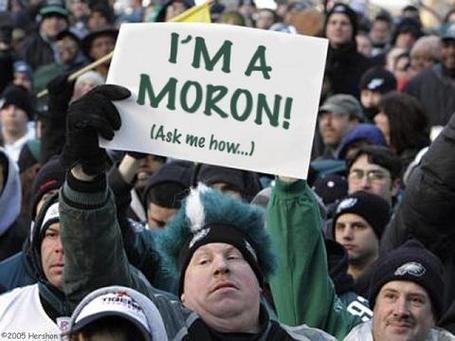 2010 can best be described as a transitional season for the Philadelphia Eagles.  For years, this has been Donovan McNabb's team.  Despite his success, the organization has decided to move in another direction, handing the reigns over to the young Kevin Kolb.  In this writers opinion, it's a good move.  Kolb appears to have a bright future in this league.  That doesn't take away from the fact that it was an extremely controversial move.  As this team heads into to 2010, all eyes will be on Kolb.  He's going to be the gas that makes this team go, and if he can be effective, the Eagles have an opportunity to be one of the best teams in the NFL.

Follow me through the jump for a look at the Philadelphia Eagles 2009 Season, the offseason, and three keys to winning this matchup.

The 2009 season ended up being a fairly successful one for the Eagles.  Other than one hiccup against the Raiders in week 6, this team didn't lose to any other opponents they should have clearly defeated.  The season ended with a bang in week 17.  Pitted against rivals the Dallas Cowboys, the Eagles headed to Dallas knowing that the winner of the game would determine the winner of the division.  But, it wasn't meant to be.  The usually explosive offense was shut out in a 24-0 loss.  The very next week the football gods gave the Eagles a shot at redemption with a first round matchup against the Cowboys.  Again, they fell short, this time in a 34-14 loss; fueling the fire that it was time to take this team in a new direction.

Although they fizzled at the end of the season, this was an extremely explosive and dynamic offense in 2009.  One could argue that Philadelphia had the best vertical passing game in the NFL last year.  With speedsters Desean Jackson and Jeremy Maclin on the outside, they were a threat to score on nearly every play.  Brian Westbrook continued to struggle with injuries last year, and the rookie LeSean McCoy ended up taking the bulk of the load during the season.  The run game lacked consistency last year, and certainly has room for improvement heading into 2010.

Defensively, this team clearly missed the departure of Brian Dawkins.  In addition to being a leader, this Pro Bowl safety made every unit of this defense better.  While the run defense remained solid, the pass defense went from elite to average; sliding from 3rd in DVOA in 2008 to 13th in DVOA in 2009.  This team will certainly look to improve on that heading into the 2010 season.

Philadelphia was not active in the free agency market.  Their only three acquisitions included Hank Baskett (WR), Mike Bell (RB), and Marlin Jackson (CB).  The Eagles were, however, very active in trading.  Because there were so many, I'll let Wikipedia do the explaining:

The NFL draft was a busy weekend for the Philadelphia Eagles.  In all, the team had managed to combine 13 draft selections.  The first pick was used on Brandon Graham (DE) from Michigan, a favorite of many of those on this blog.  None of the other selections really jump out at me, but by most accounts it was a solid draft for the team.  You can view their selections here.

1.  DO NOT GET BEAT DEEP.  This can't be overstated.  With this team's speed at receiver, they can absolutely punish teams with the deep ball.  Keep the play in front of you at all times.

2.  Get in the Nickel.  We need as much speed as possible on the field against these track stars.  And, with the run game struggling at times, I'm more comfortable with trading off only 6 guys in the box to get more defenders in the secondary.

3. Spread the ball around.  Let Vince do his thing in the passing game.  I fear that with our continuing issues with the secondary, this is going to have to be a shootout.  I think a successful passing day is the only way we win this one.

Ugh.  This one could get ugly.  These guys specialize in exactly what we're the worse at defending, the vertical passing game.  The variable is Kevin Kolb.  If he can be half as good as Donovan, they'll hang 21 on us.  I think it'll be worse.  I see a solid day offensively in a losing effort.  Eagles 35.  Titans 21.