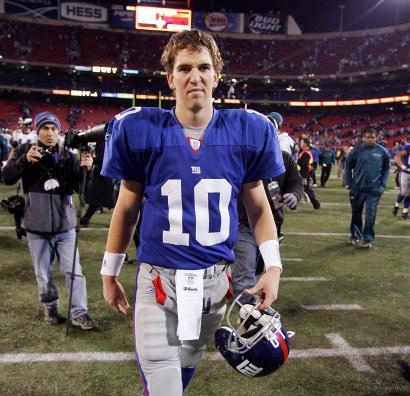 What should we expect from a matchup against the New York Football Giants?  A year ago, I would have been a lot more fearful about this matchup.  The Giants looked to follow up a solid 12-4 2008 season with more success, but fell short.  They ended the season with an 8-8 record, good for 3rd in the NFC East, missing the playoffs for the first time since 2004.  That said, this clearly remains a dangerous team, and a matchup that should not be taken lightly.

Follow me through the jump for a look at the Giants 2009 Season, the offseason, and three keys to winning this matchup.

The Giants had a similar season to that of our previous opponent, the Pittsburgh Steelers.  They began the season as one of the hottest teams in the NFL, jumping to a 5-0 start.  Then, the team began to fall apart, particularly on defense.  After beginning the year as the #1 defense in football, the Giants gave up over 40 points in 5 of the next 11 games.  And, there's plenty of blame to go around as the secondary and defensive line were both gashed for big yardage through the air and on the ground in separate games.

The statistics above paint a picture of a team that was woefully average last year, as their record suggests.  The lasting image that comes to mind when I think of the Giants is the constant pressure they applied to Tom Brady in the Super Bowl a few years back with only their front four.  That year (2007), this team led the NFL with 53 sacks, which is a stark contrast to the 32 sacks last year, good for 18th in the league.  It's a tale Titans fans know all to well.  When a defense relies on the defensive line for pressure and they can't deliver, everything else falls apart.  Offensively, this team showed that they could put up points in bunches at times, but they lacked any real consistency.

The New York Giants were a God send in the 2010 NFL Draft for this writer.  Drafting one pick ahead of the Titans, the Giants took the most over rated player in this year's draft in Jason Pierre-Paul.  In an effort to rejuvenate the defensive line that was once the cornerstone of this defense, New York selected a player with the perfect frame for a defensive end and nothing else.  Seriously, the Giants could have taken Damion James and it would have made about just as much sense.  But, I digress.  With their second pick, the Giants took Linval Joseph, a huge defensive tackle that should eat up a bunch of space inside.  The third pick was used on well known free safety, Chad Jones from LSU.  The rest of the team's picks can be viewed here.

1. Establish pressure with the front four.  Our secondary remains a black eye on our otherwise above average defense.  Without pressure from our defensive line, I fear this could be a tough game.

2.  Stick with inside, power runs.  The book ends of this Giants defensive line are quick.  Eliminate that quickness by getting bodies on them from the get go.  I'd like to see less zone blocking in this game, and more power runs.  Let the big uglies earn their money, in particular David Stewart and Michael Roos.

3. Draw plays.  Don't be afraid to mix in a few QB and RB draw plays on passing downs.  Doing so will keep these aggressive ends honest if we can catch them over pursuing a couple of times.

In my opinion, this will be the first test for the Titans, as I don't see the Raiders or the Steelers really giving our secondary many headaches.  Eli Manning, on the other hand, is capable of lighting up who ever ends up playing CB #2 and Nickel for the Titans.  We need Derrick Morgan to be an impact early in order to win against opponents with a solid passing game because last year's unit clearly couldn't get it done.  This is a very winnable game for the Titans, but I think the Giants win in a close one.  It's a coin flip to me, but the home field advantage puts it over the top.  Giants win 20-17.