With the 30th pick of the 2010 MCM Mock Draft, the Minnesota Vikings (represented by SuperHorn) choose: 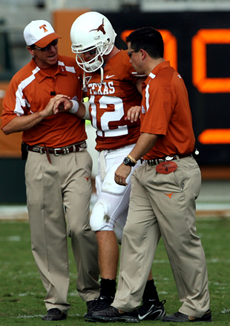 Let me start by saying that I know I'm going to get flack for this as a homer pick.  That's not where I'm coming from.

Two quarterbacks are off the board.  At least one more will be taken before pick 30 in the second round, probably two.  And, the rule in the NFL is, if you think you've found your franchise quarterback, you go up and get him.  This may be viewed as a reach, but with Favre aging, and an inability to trade down, this is the hand they are dealt.

Two leading indicators of success from college to the NFL are college starts and completion percentage.  Colt McCoy holds all time records in both categories (single season - completion %, and career starts).  He also holds the NCAA record for career wins.  The kid doesn't have a prototypical NFL size or arm, but he's got elite accuracy, great pocket presence, and above average scrambling ability (think Aaron Rodgers).  Brad Childress is a third generation Bill Walsh disciple.  His skill set fits the mold of what a West Coast offense is built around.  Short, quick, accurate throws to keep a defense honest.  This may be one of the best fits for Colt in all of the NFL.

Now on the clock: StupidFresh11 and the Indianapolis Colts