Share All sharing options for: Your 2010 Tennessee Titans NFL Schedule 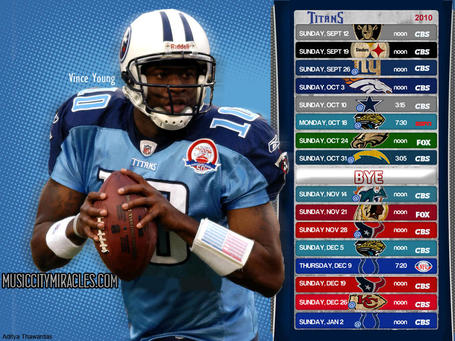 The whole world will get to watch the Titans play on National TV twice, Week 6 against the Jags on Monday Night Football, and Week 14 against the Colts on Thursday Night Football. After the jump, some more facts about the schedule from TitansOnline.com. (all times central)

· The Titans will play the New York Giants in the new Meadowlands Stadium on September 26th.

· The Eagles and Redskins will make their first appearances in Nashville since 2002.

· Five of the final six games are against division opponents.

· The Titans carry a nine game winning streak against the NFC into the 2010 season.

· The Titans regular season finale will be at Indianapolis for the third time in four years.

· This will be the latest bye week for the Titans since the 2005 season.

· The Titans and Raiders have become familiar opponents as they face-off for the ninth time (regular season and post season) over the last 12 years.

San Diego and Tennessee will face each other for the fifth consecutive season, dating back to 2006.