Chris Johnson's Freestyle Rapping, However, Is Not So G

Share All sharing options for: Chris Johnson's Freestyle Rapping, However, Is Not So G 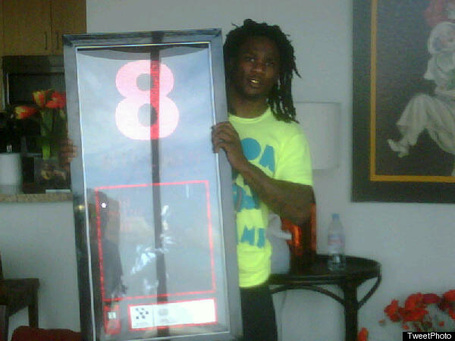 Chris Johnson posted a link on his Twitter account to a song he guest appears on called Green Flag Swaggin.  The rapper's name is Drop, and is based out of CJ's hometown and off-season home of Orlando, Florida. It's an innocuous performance with a couple of funny freestyle lines by CJ, but overall, it's very unremarkable hip-hop for sure. Mos Def and Saul Williams can sleep tight.  Still, it's an interesting glimpse into the man's world.

Also, just to stave off any dumbness in the comments: lets not get outraged like this was a full album CJ2K spent months in a studio doing while he should have been keeping in shape.  Given Pro Tools and an auto-tuner, Jimmy could make this song in a weekend, and he just found out last week that Ice Cube used to be a rapper.

I know it's taboo to say, but NFL players are allowed to have some fun in their off time.