With the 21st pick of the 2010 MCM Mock Draft, the Cincinnati Bengals (represented by Pinoy Titan) choose: 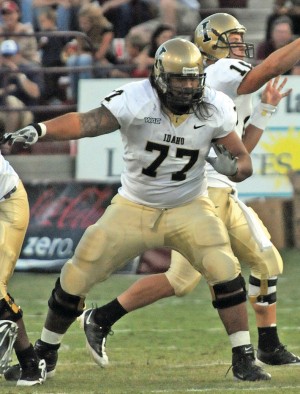 MIKE IUPATI is the best guard in the draft. He has a massive body of 6'6'', 330 lbs. and the frame to grow even more. He is quick off the blocks, gets in position quickly and walls blockers well. Works relative well through the hole and is an anchor in pass protection. Bends knee well and has good balance. With his physical attributes and athleticism, and with good coaching, he could play the Tackle position.

The Cincinnati Bengals plays a lot of an unbalanced line of scrimmage on running plays wherein they replace the TE with a T. Bringing in another tackle to play the tight end spot forced defenses to adjust. This may well be the reason for the Bengals' huge improvement in their running game. MIKE IUPATI would be a great asset in this scheme with his quickness and power. If he continues to develop his skills, he could well be a starter by midseason or in his second season with the Bengals.

P.S.
He could very well be the next great OG since Eugene Amano.

Now on the clock, the MCM lover of everything Boston: T--Rac's Posse and his New England Patriots