With the 19th pick of the 2010 MCM Mock Draft, the Atlanta Falcons (represented by Kayne) choose: 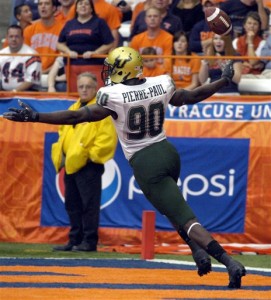 The Falcons could not pass him up at this point in the draft.  The Falcons major needs are at DE and OLB.  Cornerback was a major need, but the Falcons feel the recent signing of Dunta Robinson should solidify that position.  The Falcons need a DE to take the place of Jamaal Anderson. Atlanta drafted Anderson with the 8th pick in the 2007 draft.  Anderson, who is still with the team, has only recorded 2.5 sacks in his three years with the Falcons.  Atlanta was ranked 28th in the NFL in both pass yards allowed per game and sacks in 2009.  They just could not get to the QB consistently enough.  Pierre-Paul is the best pass rushing prospect in the draft.  The concern with JPP is that he may not be ready to make an impact next year in the NFL as the Falcons are expecting to compete with the Saints as a division contender this coming season.  USC DE Everson Griffen probably is more NFL-ready, but there is no way the Falcons could pass on a prospect like Pierre-Paul.

Now on the clock: vancouverTITAN and the Houston Texans