With the 18th pick of the 2010 MCM Mock Draft, the Pittsburgh Steelers (represented by SouthTexasTitan) select 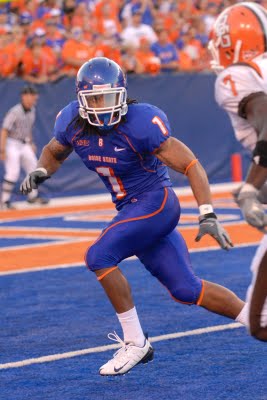 Now I know that Kyle Wilson could be an early 2nd, but right now I don't see him falling past the Steelers. Their pass defense wasn't the best and that was due to Polamalu playing only five games. I see them getting a corner because the Bengals have been stocking up on WRs adding Matt Jones and Antonio Bryant. And the Ravens acquisition of Anquan Boldin doesn't help the Steelers at all either. Kyle Wilson has great ball skills having 11 career INT with Boise State, and is also very good in pass coverage. While he has some weaknesses in the run game, the Steelers were third in run defense. I see this pick only make the Steelers better.

Now on the clock: Kayne and the Atlanta Falcons