With the 15th pick of the 2010 MCM Mock Draft, the New York Giants (represented by phildar) select: 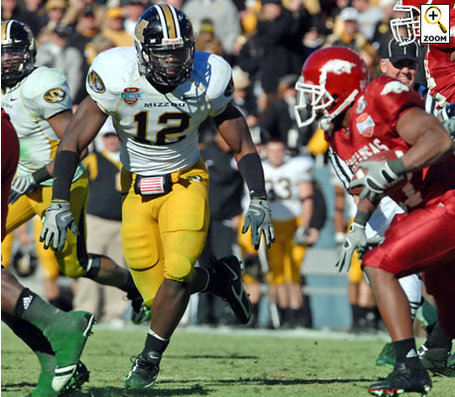 The most glaring hole the Giants have this offseason is the linebacker position. My initial pick would have been Rolando McClain, but with him already gone to the Broncos (which I have seen happen in a few mock drafts) the next best choice would be Witherspoon. And he's not a consolation pick. He has the potential to be a starter as a rookie. The team would also be relieved of any decision-making on McClain's health status with Crohn's disease. Weatherspoon had a good combine with 4.68 40 time, 34 reps on the bench press (2nd most at the position,) 40-inch vertical leap, and 11.59 sec 60-yd shuttle. He had a good showing at the Senior Bowl, and he appears to have versatility as far as speed, strength, and being able to play all three linebacker positions. Some of the knocks on him have been size (6"1, 239 lbs, 31 and 1/4 inch arms) and inconsistent reaction times. Weatherspoon is a solid pick with intelligence, durability, and leadership potential which the Giants will need since they no longer have the leader of their defense, Antonio Pierce. Pierce is listed at 6"1, 238 lbs. A coincidence? I think not.

Now on the clock: Thunder64 and your Tennessee Titans