With the 14th pick of the 2010 MCM Mock Draft, the Seattle Seahawks (represented by TitanFan2K) select: 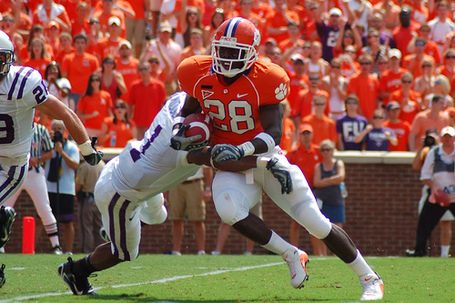 I strongly considered not taking an OT with my 1st pick but I'm glad I did after seeing the run on OT's that came after.  Now like I said in my first post, the 'Hawks need help just about everywhere.  On the offensive side of the ball they were 15th in passing YPG, 26th in rushing YPG, and 25th in scoring.  Things were just as bad on defense as they were 30th in passing defense, 15th in rushing, and a nice symmetrical 25th in scoring.  Still, with all that uncertainty at so many posistions, this is the easiest pick in the draft.  This team needs a playmaker.  Period.  And when I say playmaker who is the 1st person in this draft to pop into your head?  That's right, C.J. Spiller. Put him in the backfield, in the slot, or at the return position, it doesn't matter. You just need to get this guy in space and good things will happen.   With a good young LT, an exciting RB, and the potential to draft a QB who isn't named Jimmy Clausen in the 2nd round, Seattle has a foundation set up for a great offense.

Now on the clock: phildar and the New York Giants