With the twelfth pick of the 2010 MCM Mock Draft, the Miami Dolphins (represented by AGRIFF) choose: 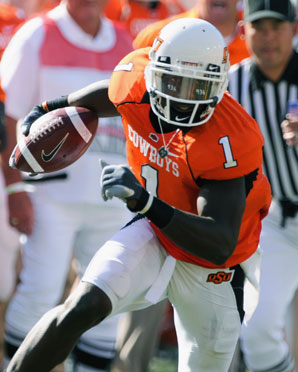 The Dolphins have a stellar running game with Brown and Williams but lack any playmakers through the air.  This was definitely evident when they played us this past year (the only reason they were able to pass on us in that game was because of our defense).  Now with Chad Henne appearing to be next year's starter they need to get him some help.  Bryant is a very physical receiver with good hands and is an excellant route runner.  He could work on his release and off the field issues (which have happened often) must be kept to a minimum.  I don't think that off the field isssues would keep Miami away.  Last year they drafted Vontae Davis who had had off the field issues and has had none as of yet in Miami.  This pick would make Miami's offense tremendously better adding a respectable receiving threat.  The only way I don't see this happening is if Dez Byrant isn't there at #12.

Now on the clock: jmztitans2 and the San Francisco 49ers.