With the tenth pick of the 2010 MCM Mock Draft, the Jacksonville Jaguars (represented by TattedTI) choose: (tebowtebowtebowtebow) 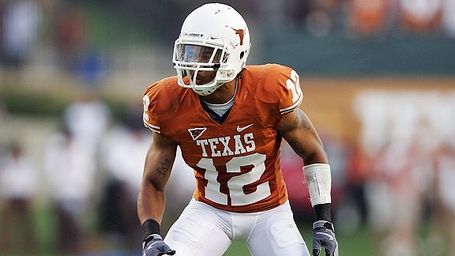 OK as bad as I really wanted to draft TIM TEBOW at this spot only cause he would put fans in the seats and help sell jerseys in Florida I just couldn't do it sorry TNTitans i know the man crush u have going on with him.
So with the 10th pick in the 2010 NFL MCM mock draft the Jacksonville Jaguars select Earl Thomas Cornerback from the University of Texas. Ok i know what your thinking I'm a homer since I'm from Texas and I love Texas Football as much as i do Titan football but i did consider the fact that the Jags were ranked last in pash rush and had the lowest sacks in the NFL as titan fans we all know that D-Line is the key to making our secondary look like Pro Bowlers and with few D-lineman still on the board i couldn't help but draft a DB that can make plays force turnovers. I'm a strong believer in big plays on both sides of the ball especially on defense.

Redshirting in 2007, Thomas stepped in and started all 13 games for the horns, intercepting 2 passes, breaking up a whopping 17 others, along with forcing 4 fumbles. He stepped up from Freshman All-American to national All-American as a sophomore this past season, leading the NATION with 24 passes defensed (including his second-ranked eight interceptions). Thomas also made 143 tackles over the past two seasons.

The final day of the NFL Scouting Combine is reserved for the fastest competitors - DB'S
ET   5-foot-10, 208-pound Thomas was a top performer in the bench press, where he benched the standard 225 lbs. 21 times. He tied for 4TH best of 11 participating safeties and had two more than top safety prospect, "Eric Berry"
NFL.com analysts were impressed with Thomas' performance and reported , Thomas is one of the best playmaking safeties in the draft.
"He consistently provides blanket coverage on RBs(jags are hoping ones frm this list ..slaton,addi,CJ ok maybe not our CJ but u get the picture)  and tight ends. Unlike [USC's Taylor] Mays, he does well covering receivers deep and is equally comfortable in man-to-man and zone schemes. Thomas makes good reads and has Superior instincts. He also has excellent ball skills."
He will bring playmaking ability when jags face manning and his crew .. matt and his friend Andre the giant.. and of course their gonna need all the help in the world when they need to cover VY screen passes to our boy CJ. (go Titans)

Now on the clock: SoCalTitan and the Denver Broncos