With the ninth pick of the 2010 MCM Mock Draft, the Buffalo Bills (represented by DonFrancisco) choose: 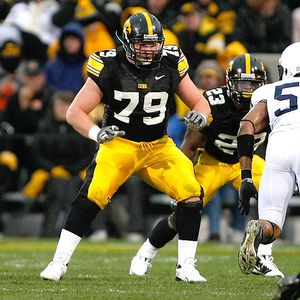 The Bills have several holes to fill specifically most notably LT, QB, LB, and possibly WR depending on TO. There are good players on the board in each position. Although the Bills may lean toward taking Clausen if the draft played out like this, the best pick for the Bills is Bryan Bulaga from Iowa. Bulaga has prototypical LT size at 6'5 3/8 and 315 lbs, good strength, and is more athletic than expected (take that Carlos).  In addition, at 20 years old, Bulaga is still very young and probably still maturing physically. As for his skill, his run blocking is very good with his strength, technique, and a little bit of nastiness.  His pass blocking is solid but less developed. He has good technique but will need to continue to learn and improve. He does not have the biggest upside of any OT in the draft, he should be able to start from day one and be able to solidify a porous OL for the Bills that gave up 46 sacks (4th worst) and 103 QB hits (2nd worst) and further improve a decent run game.

Now on the clock, my boy TattedTI and the Jacksonville Jaguars.