With the sixth pick of the 2010 MCM Mock Draft, the Seattle Seahawks (represented by TitanFan2K) choose: 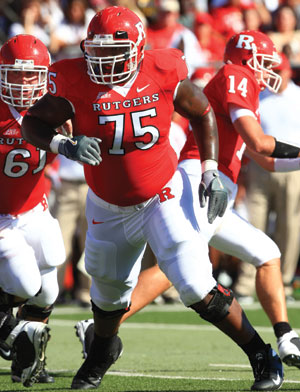 The worst case scenario happened when Bradford, Suh, McCoy, Okung, and Berry all came off the board before this pick since I had them 1-5 on my board.  I was hoping one of them would slip but it just wasn't meant to be.  With that, I'll be forced to take Anthony Davis, OT from Rutgers.  It's never fun for a fan when your team takes an offensive lineman, but the Seahawks need help just about everywhere and when rebuilding a team the line is where it needs to start. It doens't matter how good your skill position players are when your line can't block.  He will be a good replacement for the gaping void Walter Jones left at LT.  I also considered Joe Haden and Derrick Morgan

Now on the clock: ericjosephson and the Cleveland Browns